Okay, this is the third time I’ve tried to write this post. Sigh. My computer is having snit fits.

Last week was the Spanish Peaks International Celtic Music Festival.Take a peek at their website!

I did a lot of baking for two bake sales I had promised I’d do for Barbara Yule. Thursday after work, we headed up to the Ceilidh in Gardner. It was wonderful. Lots of good music and almost every act played. Morgan joined us after her volley ball game. Gardner won!
Friday was the picnic at Uptop which is the ghost town at the top of Old La Veta Pass. The bake sale was good and the music great!. That night, we worked the concert at the Fox Theater in Walsenburg. Ed Miller and John Taylor followed by Chris Newman and Mairi NiChathasaigh. Lovely lovely evening.

Saturday, I baked more items and we then went to the concert at the Fox. This time it was the Shamrock Kitchen Quartet. Singing and Sean Nos dancing. Once again a wonderful evening. Sunday we got up early, packed a ton of baked goods into the truck and headed to La Veta for the morning bake sale. We did really good and headed over to the concert with Colcannon Express. Fantastic music. We had a great time. The whole festival was wonderful.

Monday, I woke with a Migraine… Ugggghh… too much sun, not enough water, and stress. Wonderful combo. NOT. I crawled to the aspirin, and Dan brought me the phone so I could call off work. I was in bed most of the day. By about 6pm, I began to feel human. I read a bit and then went back to bed.

Tuesday, I was up and moving, because I had Jury Duty.

I was there by 8:15am. I didn’t expect to be chosen. I was the last juror chosen. We took a lunch break and the trial started at 2:30pm. It was a Domestic Violence type case. We heard all the evidence, saw pics, listened to witnesses. We went into deliberation around 7pm, and they got us dinner. After a lot of deliberation, discussion, agreements, disagreements, and more discussion, we finally decided that while something obviously happened, that there wasn’t enough evidence to convict. We had way too many doubts. So, about 8:45pm, we gave the judge our verdict. You could tell that the DA and the Judge thought we were nuts, but we just couldn’t choose anything other than Not Guilty on the evidence we were given. That whole thing about ‘reasonable doubt” takes on a whole new meaning when you look at the laws. I got a certificate. That was just strange. It even has the court case on it. As I waited for Dan to pick me up, the defendant came out and thanked me as he passed. I just nodded.

I got home at 9:15pm, and was asleep before I could even hit the pillow.

Today I went to work, did a bunch of errands. I met with John and told him again that I want a divorce and sent him a list of stuff I want from the house

Tomorrow I’m going to catch up on the tons of email I have to read and then I’m going to start working on the house. I have a big urge to do Fall Cleaning!!!

Thursday was Dan’s 47th birthday. It was also the day we had to head up to Palmer Lake and have lunch with the Governor. On top of that, it was the day Ian headed for MEPS, the big physical which decides if he can enlist or not in the military. Oh, and my parents left for New Mexico and we are babysitting Elway, the cat.

So,… Up at the crack of dawn. Morgan off to school, and all three of us trying to cycle through the bathroom to get ready to go. 8am, all of us out the door. We dropped Ian off in Pueblo and headed north to Palmer Lake. It was a good thing we were early, because we got lost. The Inn at Palmer Lake might as well be the Bat Cave. It isn’t easy to find at all, even with directions and GPS. One of the women there said her Garmen’s GPS had failed. sigh…

The meeting was great. Governor Ritter signed the Colorado Workforce Development Council into law/being and then we had lunch. The food was okay, and yet not enough. One of the guys at our table asked if everyone was hungrier than they were before lunch. Most were. As it was, we ate in Pueblo on the way home. 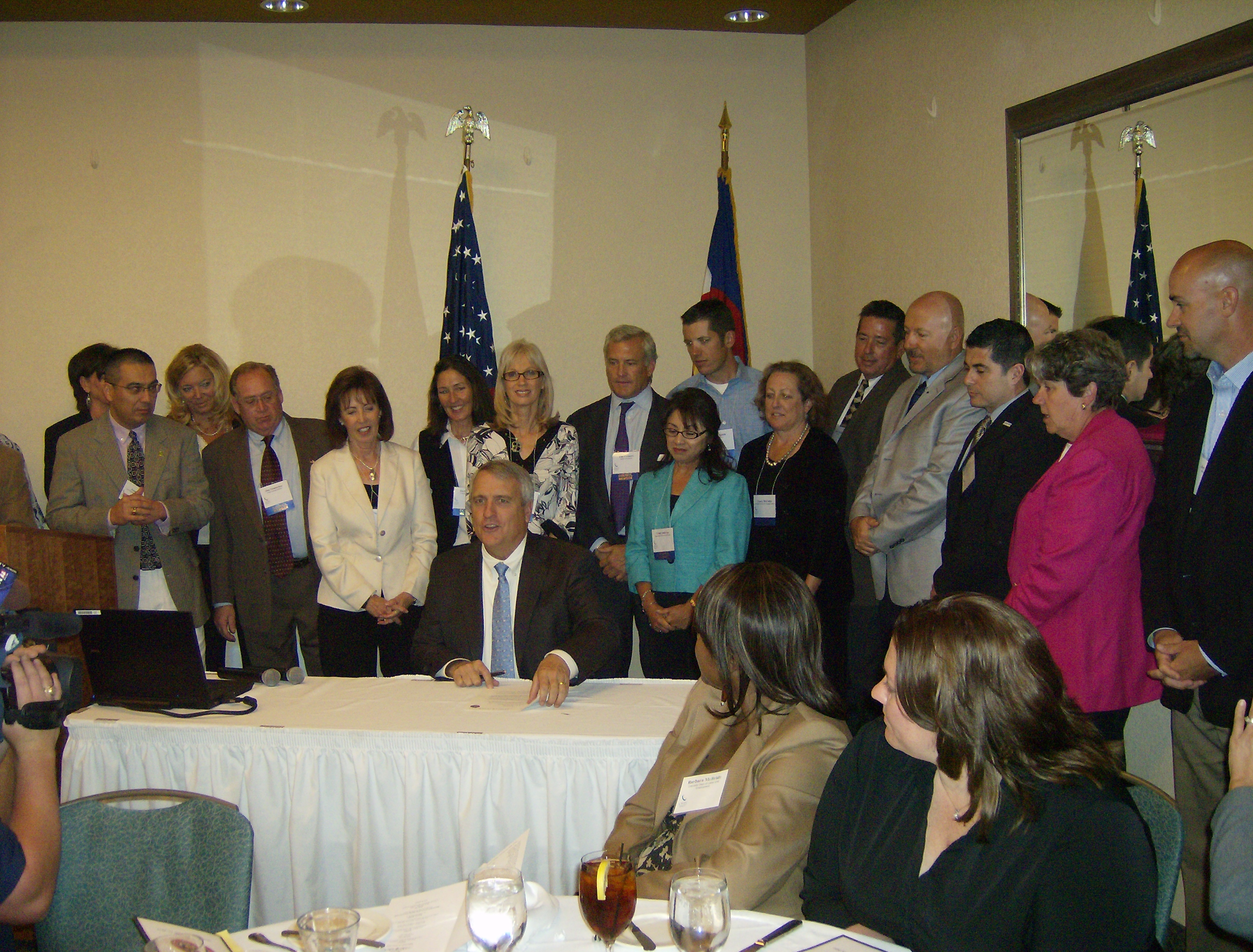 After our ‘second lunch’, we drove to Gardner for Morgan’s volleyball game. Gardner was playing La Veta. It was a tighter game than Aguilar, but Gardner’s A and B team were both winners. As a treat, we took Morgan to A&W for a rootbeer float. 🙂 We had a little bit of time with her before she had to head over to her mom’s for the weekend. sigh…

Then it was time for a bit of quiet for Dan and I. I sat down to my computer so I could write and Dan started on school work. There wasn’t any magic smoke, but my computer died. Dan thinks it is the hard drive and we will try and fix it in the next few days. Meanwhile, I am timesharing on his computer. pout… tears… sadness…

Friday Ian enlisted in the Air Force. He isn’t sure when he will ship out as he is waiting for a job opening.

Today we went to the Upper Huerfano to pick choke cherries. The bears had been there first, so we got more rosehips. sigh…

Tomorrow I plan to do a lot of baking for the Spanish Peaks Celtic Festival where I will be holding two bake sales. At least that will keep my mind off the lack of computer.

The mornings have been getting cooler, and Autumn is getting closer! I’m harvesting squash out of the garden and finding 101 ways to serve it. 🙂 Tomorrow we are off to the hills to harvest choke cherries. We harvested rosehips last week and most of them were on the edge of over ripe. I didn’t get as many as I’d like, but we will see if there are any up higher.

In a week, the Celtic Music Festival will begin to roll. I have two bake sales to get ready for. Wheeee!!! I’m going to try to do little pies as well as cakes, breads and cookies. First one is at Uptop, the old La Veta Pass ghost town. The second one is in La Veta on Sunday. I’m a bit nervous about this, but looking forward to it too.

We borrowed my parent’s truck on Friday and went to Pueblo. We had some parts to pick up for a job Dan has on Monday. Plus, we decided to buy some groceries and Morgan needed some school clothes. We ran around and did the job shopping first. Then we went to lunch at Wendy’s. Morgan biffed the door and did the whole spin and land on the floor thing. She felt so ditzy.

Then we went to the ARC. It’s a second hand shop, and while we looked at tons of clothing, the only things we got were a pair of sleep pants for Morgan and 6 tiny bread pans for me. Figured that it would be useful to have them when I do the bake sale for the the Celtic Music Festival in a couple of weeks.

Then we went to Old Navy. Morgan found 2 pairs of jeans, a top and a pair of exercise shorts. After that, we went to Walmart and found her 3 sports bras. All total, about $65 worth of clothing. Sort of an expensive month when we add in the $20 I paid Gardner school so that her athletic fees would be paid. Oh well. Hopefully, I will get some more hours and not be so short on cash the rest of the month.

Then we drove home. It was a crazy day, but a fun one.

First off, we finally found Blanca a new home. She now lives up in the mountains away from the trains and has 35 acres to roam in with a canine friend named George.

Second, we have had a real plague of mice this year. Last week, Dan opened the cupboard under the sink to find a bullsnake sitting there. :::::shudder:::: I am so very glad that Dan found the snake and not me!