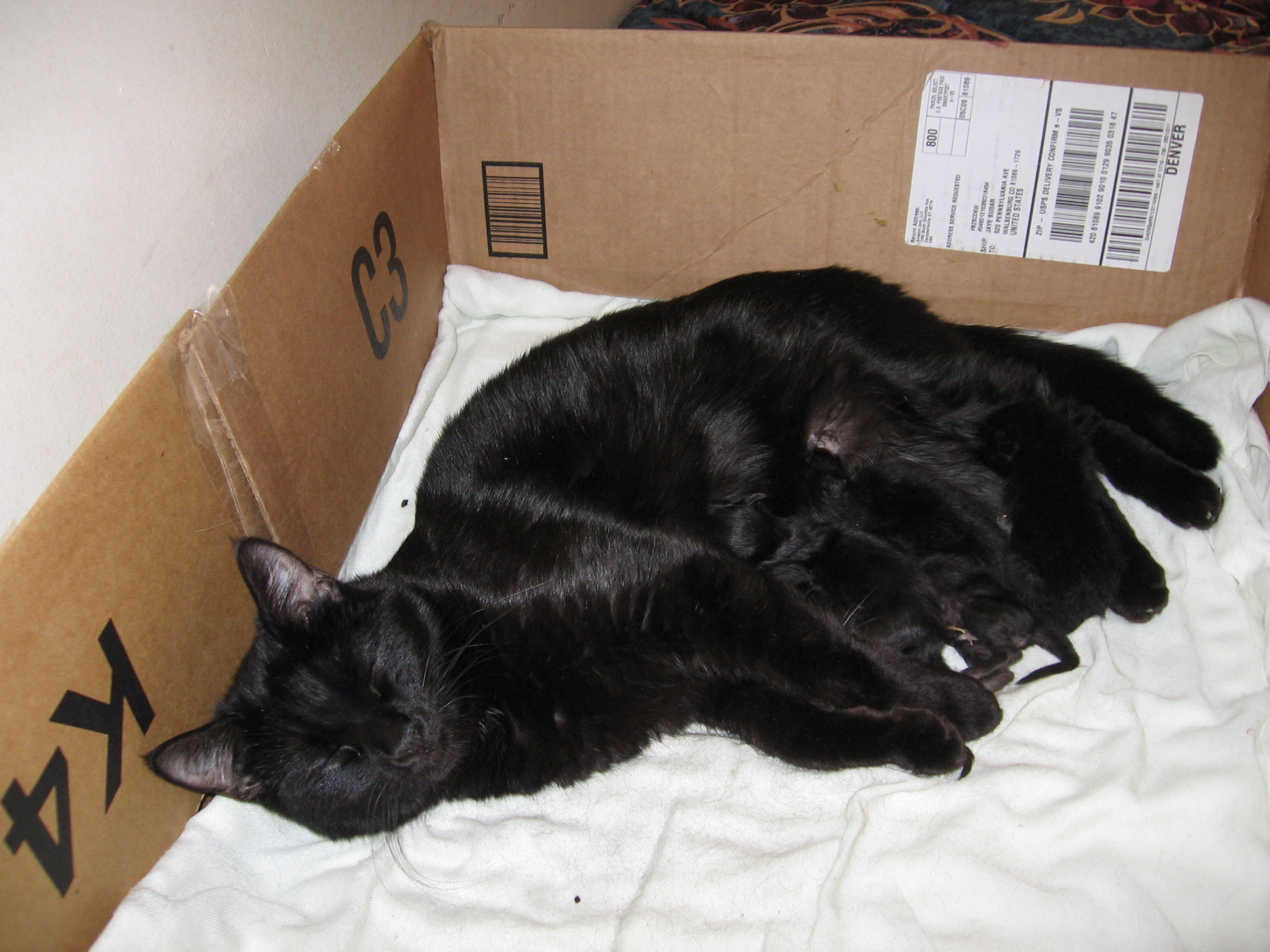 This is Dan up on the first hike. They were looking around for signs of the old Spanish Fort. They later found a spot that they think might have been a lookout post. 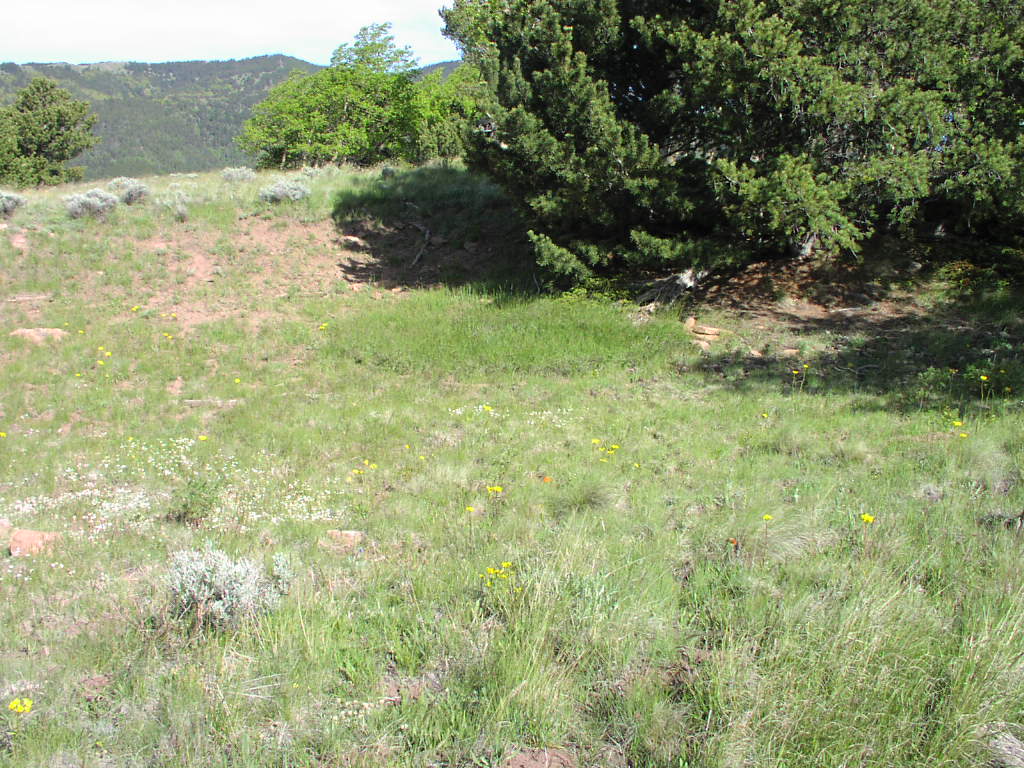 This is a view of Sheep Mountain to the north of the previous shot.  They had a great time hiking in this area. 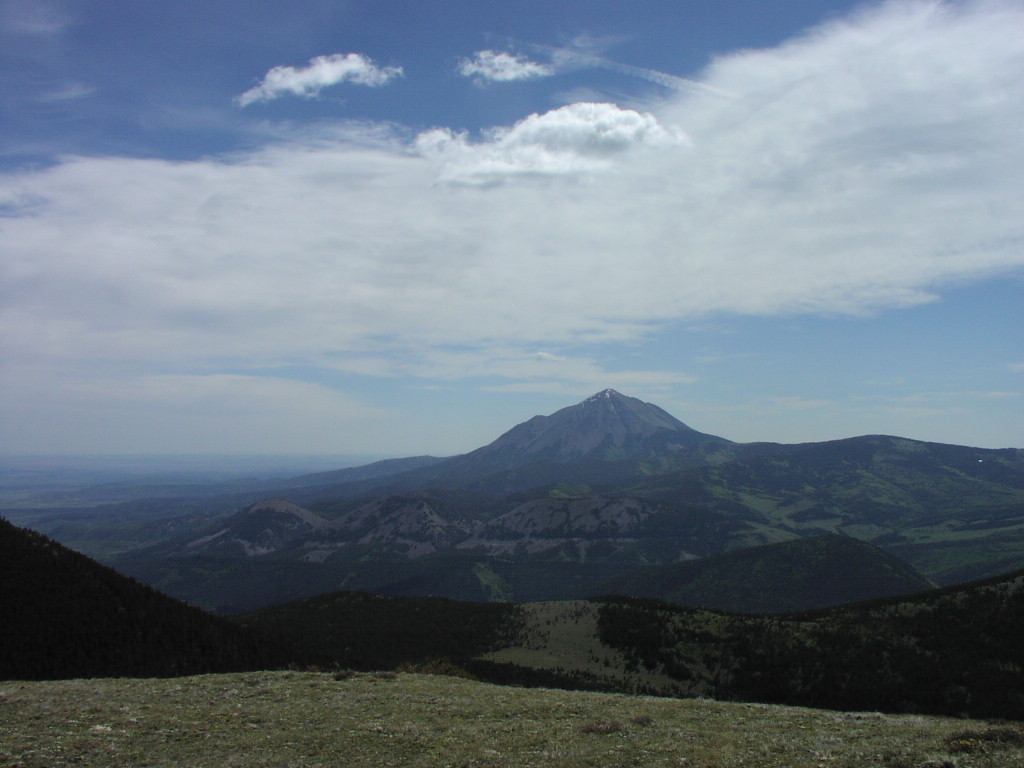 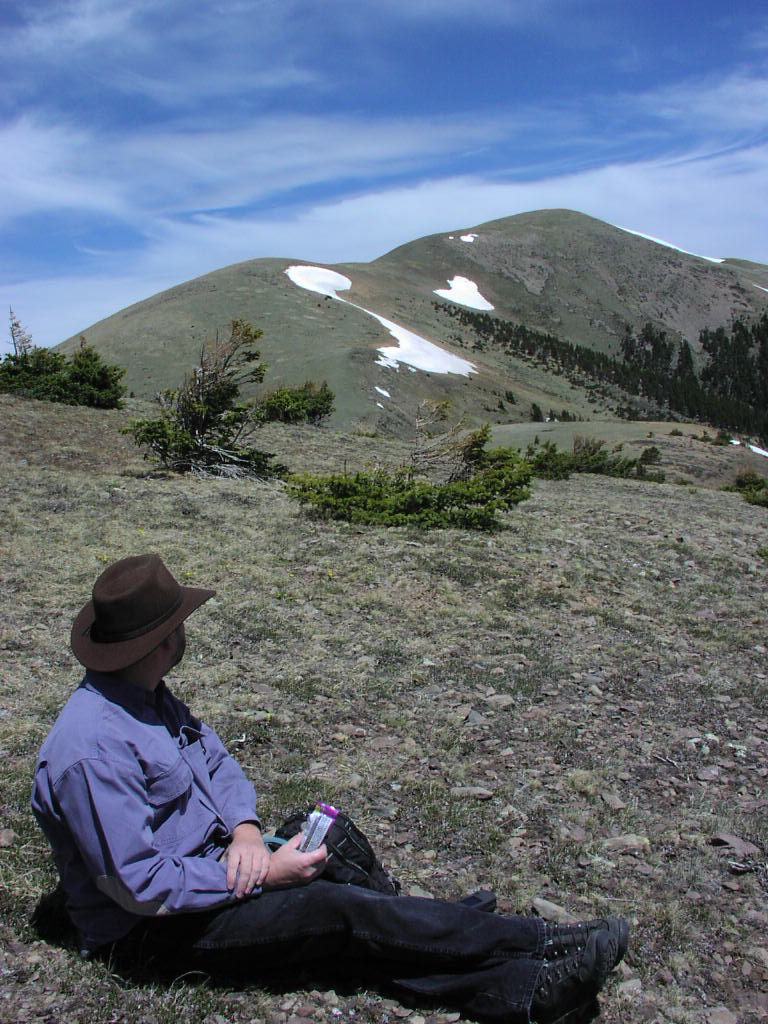 I’m not sure whether to giggle or not. My dad has been feeling the urge to go hiking now that the weather is nice and warm. Walks around the lake and Lathrop park have been nice, but not enough. So, as Dad is 72.5, he’s decided that the ideal thing is to have a hiking buddy. He asked Dan if he’d like to go hiking. You’d think it was a match made in heaven. Dan has been wanting to go hiking. So, when Dad asked Dan, the answer was a resounding YES!.

They went out Saturday for about six hours. About a five mile hike. They took it easy. They left at 7am and Dan was back by about 1:30pm. Exhausted. His comment was that he was A) out of shape and B) “Your Dad walked my legs off!”. I had to laugh. Dad has this stride, once he gets in it, he eats up the miles. I remember as a teen and in good shape, watching him walk the legs off anyone with him. However, Dan had a great time. Dad came by the next morning to pick up a map he’d forgotten and let Dan know that he’d walked the3.5 mile trail at the lake in 54 minutes. Dan smiled although I think he was thinking “shit!” in the back of his mind. They made a date to go out on Tuesday.

Well, Dad picked Dan up at 7am. They headed up to Blue lake. Another 6 mile hike. Dan got home around 3:30pm. Worn out again by Dad. Although, he said Dad was pretty tired too. They had a good time. Discovered that they are pretty well matched. Dad is happy and so is Dan. Dad gets to go out hiking and Dan is getting in better shape and getting to go hiking. I couldn’t help it, I had to tease Dan about being Passepartout to Dad’s Phineas Fogg. He got the joke.

I think it is great.

We’ve had Morgan and Kayla at the 520 house for the last three nights. We had Matt here last night as well. That wasn’t too bad, but we also babysat Spike for Daniel. The house was full of noise. Squeals, barks, hisses and noise from the TV and computers. We got a short break when they went swimming and out for pizza, but the rest of the time was rather loud. They watched vampire movies until nearly 2am!

Here are the girls. Giggling and being silly on the computer. This morning I made bacon, eggs and biscuits for breakfast. It is Matt’s 16th birthday. Tonight the kids are working at the move theater and treating Matt to the movies. Wheeee…. Then they are here again for the night.

I have to admit that it will be nice to have a bit of quiet while they are at the movies.

In other news, Lyra had five kittens on Tuesday. That brings the number of cats up to fifteen at 203. Gods! I have possible homes for three of them.

School wise, I’ve got all A’s. All points too. Now if I can keep that up when the subjects get harder. Intro into online learning isn’t that difficult. Biggest issue is not dissing the instructor during Live Chats. I’ve made a few friends too. Daphne in Louisiana and I have struck up a good beginning friendship. We have fun chatting back and forth. There are a few others I want to get to know better.

The library is getting ready to shut down and move into their new building. I get to go help pack boxes later next week. Wheee….. At least I am not swamped by classes at this point. I took out a stack of books to read while they are closed. The idea being to get all the patrons to take home at least 10-15 books each. This way there will be fewer to move. It makes it interesting on the other end, when they all get checked back in, but… it does make fewer to pack up.

John is in Denver today. He had a VA appointment. Dermatology. His skin is doing better. He is waiting in town to pick up some caviar for the grand opening. I hope someone likes the dammed stuff. I sure don’t. Bleckkk…. Tarmasalata is good, but totally different. I have a dress made for the grand opening. I need to make a waistcoat to go with it to finishe out the outfit. Plus, as I like this pattern, I’m going to make a few more in different materials. I also have a surprise… 🙂 Can’t wait to unveil that one. Of course, the grand opening coinsides with the end of the first chunk of classes. This shall be interesting.

I had two challenge tests to take for college. One English, one math. I’m horrid at math, so I decided to do it first. English should be easy, right? So, I sit down, start the math test and panic. It was all Business Math, and “story” problems. Dan walked by and saw me glaze over. So, he gave me a few words of encouragement and reminded me that I could do this. Lots of blood, sweat and tears later, I passed. I was amazed.

I took a break, had some lunch and then in the afternoon, I tackled the English test. Now, the advisor had said that the test had a few questions about APA in it. (apa is the style of writing a paper the college requires) I studied a bit and figured that I’d be ok. (insert laugh track) The test wasn’t an English test. It was an APA citation test. A good 2/3rds if not 3/4ths of the test was about APA. Sigh… I failed.

Couldn’t believe it. Oh well. Class wise, I am making straight A’s with no points lost. This is an easy class though. All on how to take an online class. Not sure what’s next besides English.

I’ve been playing on Facebook a lot. Its been fun. I’m finding all sorts of people that I haven’t heard from in years.