Geeze! I keep waiting for life to slow down. Guess that won’t happen any time soon. Last week was busy with cooking more pies than I ever want to do again. At work I did 46 pecan tartlets,  4 pumpkin, 3 coconut cream, two pecan pies and one chocolate cake. Oh, and I helped with about 15 more pumpkin pies.

Plus, I had my baking to do on the day. We had roast pork with green chilies and garlic, stuffing, sweet potatoes with pecan crumble on top, brussles sprouts, green chile relish, and pecan pie for desert. Yum.

We also took care of my parents cat Elway, did two computer jobs -one of which involved a trip to Denver and back in a day- and all the normal everyday stuff.

I thought this week would be quiet. However, for a Monday, it was hell. Woke up sick. It snowed And…. At 6pm, Brandy went charging out the back door to defend Ian and Emma against…. a skunk. She got it full in the face at close range. Awwwwgh!!!! Two hours, hydrogen peroxide, baking soda and VO5 shampoo, lots of water and towels and she smells better. Granted, the house still stinks. Gaaaahhh!!!

Tomorrow I have a school board meeting to cover and then Wednesday thru Saturday we will be gone. What a week. 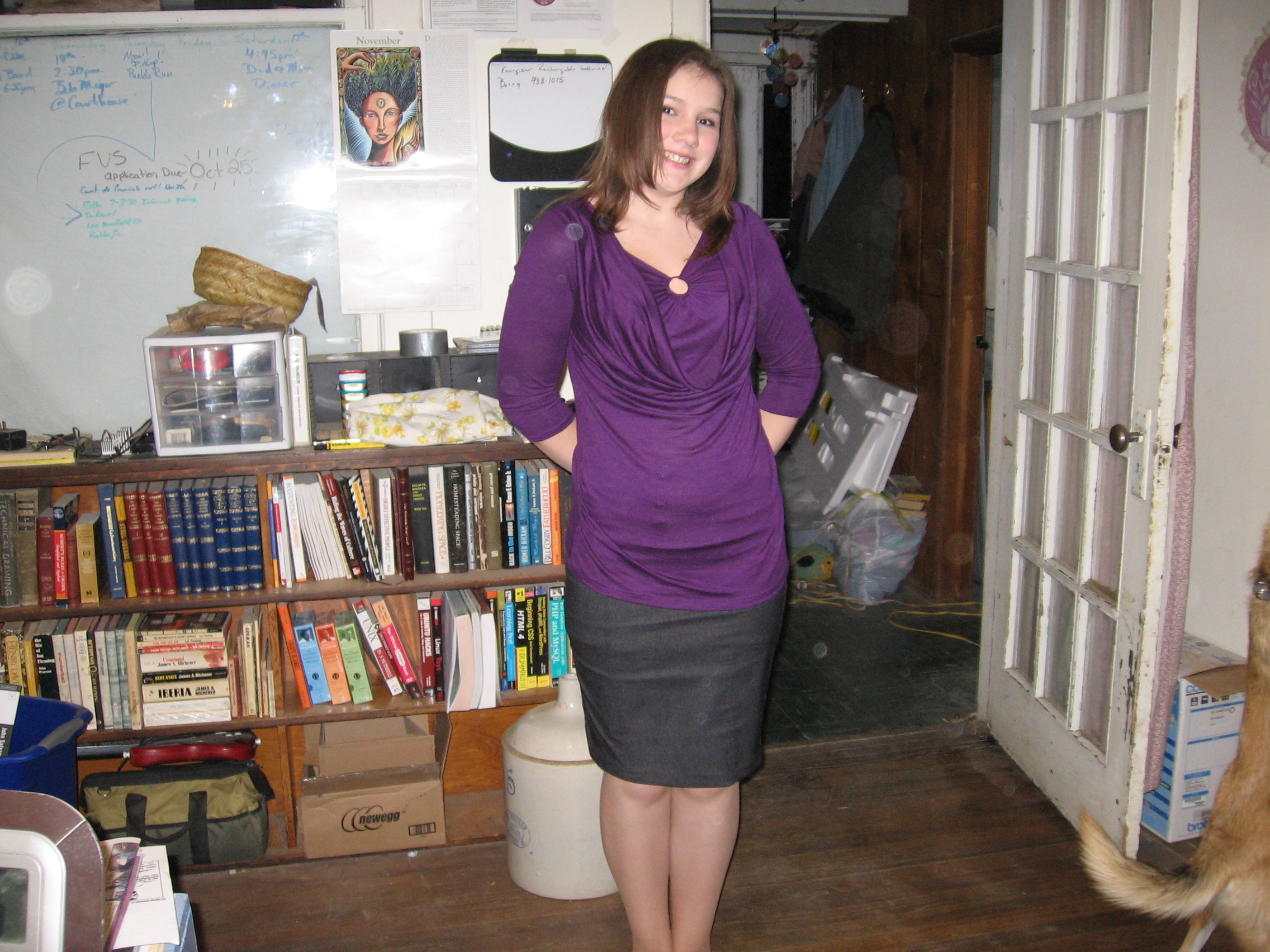 Here is Morgan all dressed up in her pretty clothes. We got her a new outfit so that she could feel pretty when we went to the Fountain Valley Reception for new/prospective students. She looked so good. 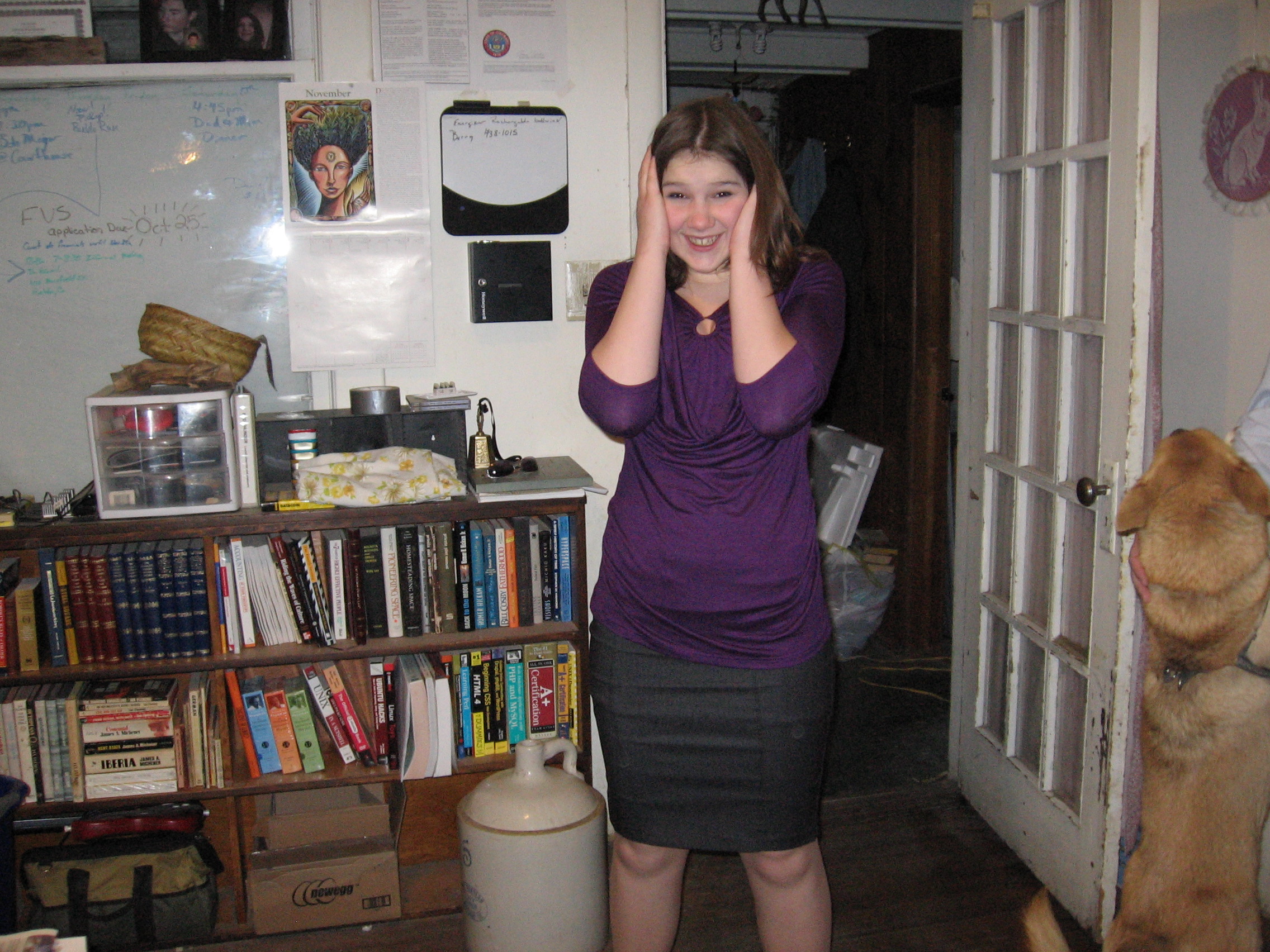 This is Morgan being silly, and de-stressing. 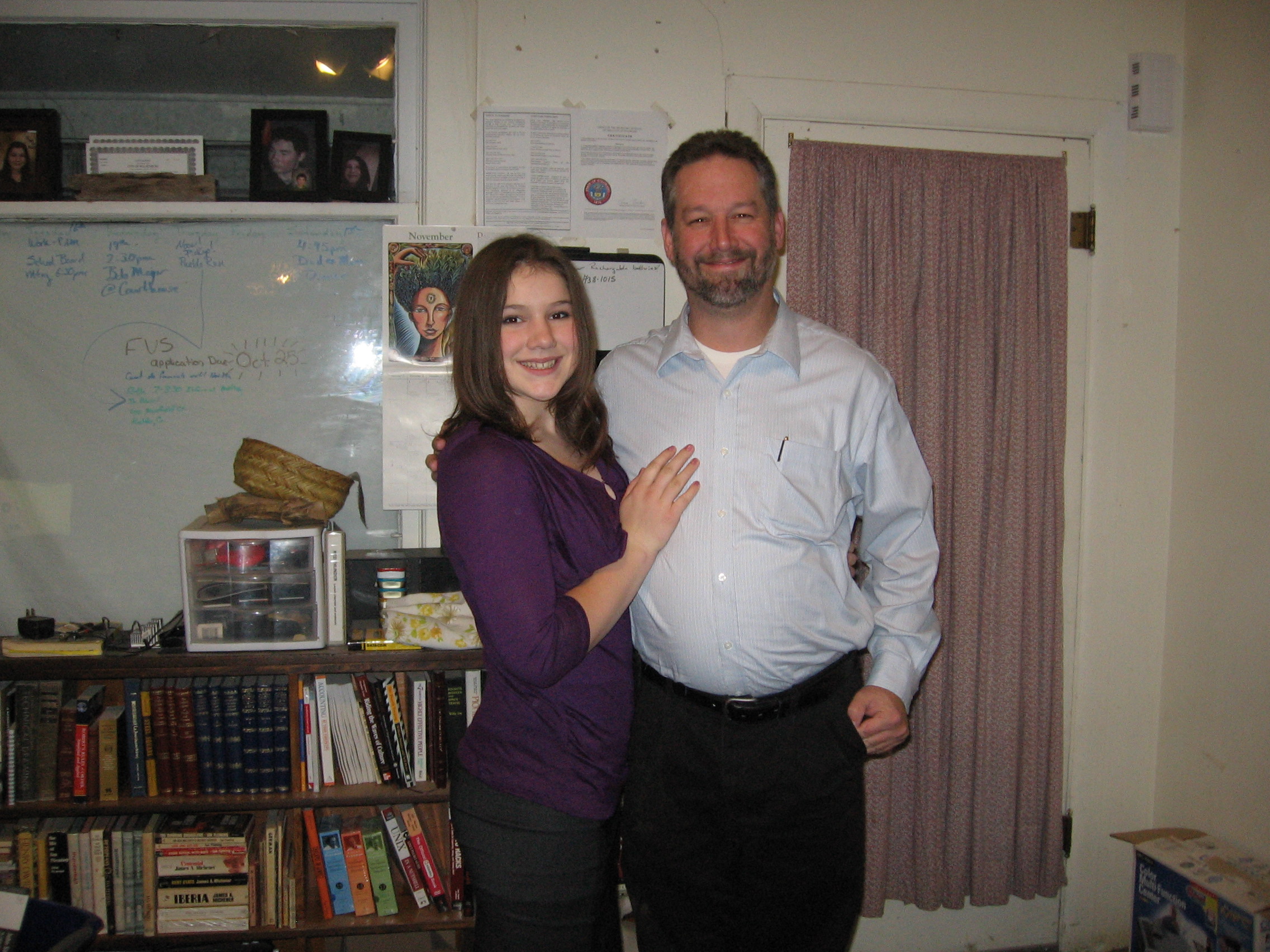 Morgan and her Dad. 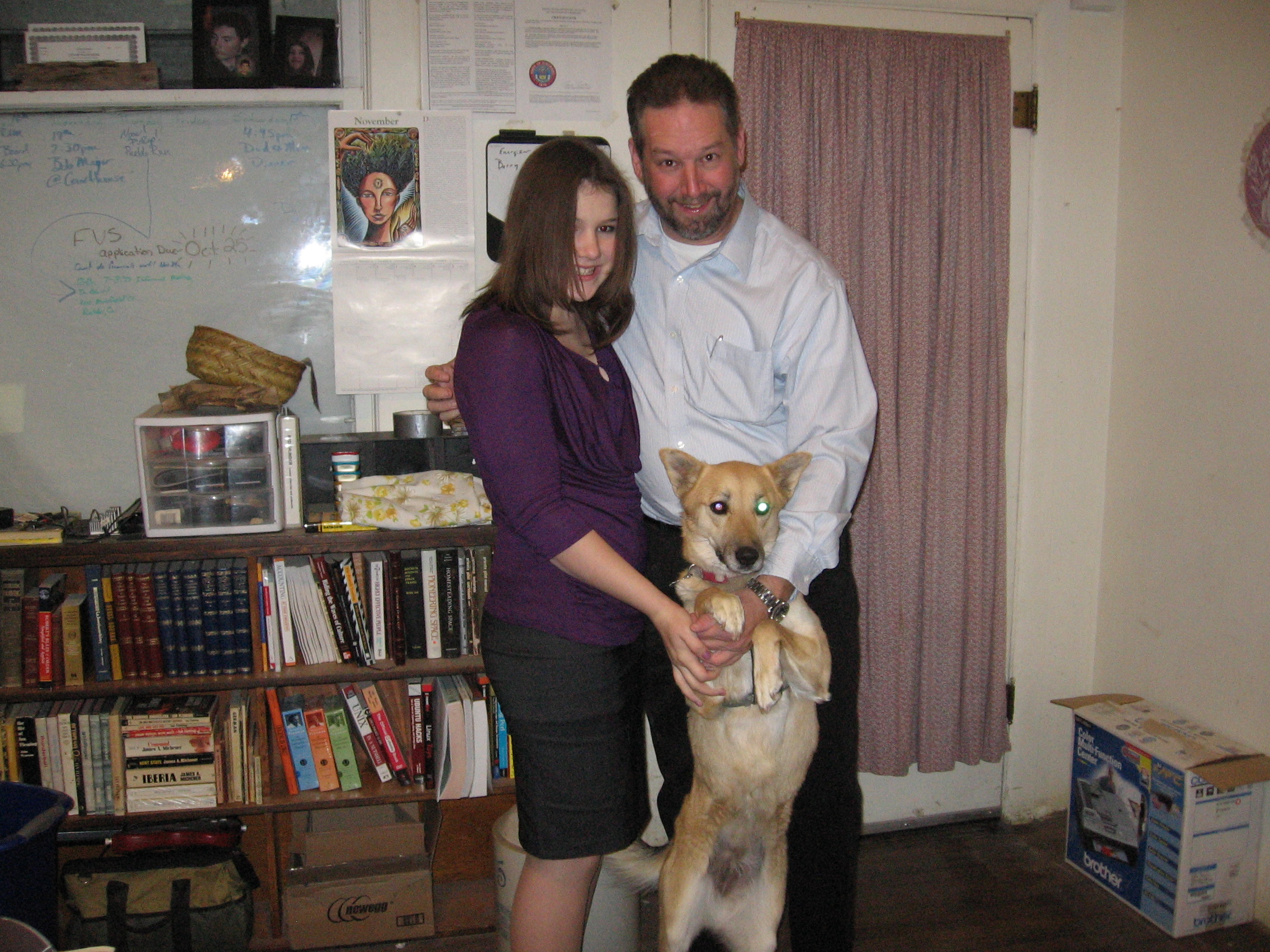 We had a great evening with the Fountain Valley students, parents and admission clerk. Now to get Morgan into the school.

Although my birthday was last week, my presents arrived a little later. Thursday night, a big box arrived. Dan gave me the box and smiled. Opening it, I found a really cool garden tool set with seat. 🙂 Of course it was snowing, but… I will use it as soon as I can. 🙂

Then we went off to Denver on Sunday. We got to see my friends Mari and David. I haven’t seen them in about 6 years. They had never met Dan either. We had a great visit. Our hotel was very nice too. The best bit of course is always the long soak in the tub! Monday morning, we headed for the Federal Center to get USGS maps for my Dad. He is teaching a map course. We stopped at Isis, but the guy who buys books wasn’t in. Oh well. We had a coffee at Starbucks and headed to our computer client. Our client had gotten her new printer and digital camera. The printer is one of those all in ones that does everything except wash the windows. 🙂 It is a really fantastic and we will be buying one for the business. The digital camera is very nice too.

Afterwards, we headed for Pueblo where we met with another client. Or, at least Dan did. I had an asthma attack, so I stayed in the warm car. It was snowing. Once he helped her find a computer, we went to Bingo Burger for dinner. Yum!!! Once again, I had the lamb burger.

The drive home was okay. Some light snow, a bit of ice, and not much else. Dan told me to go straight in, and that he’d unload the truck, because of the cold and my asthma. I walked in and what did I see? A box from Dell! My other prezzie had arrived. I am now the happy owner of a Dell Inspiron 1545. I opened it up and played with it for a bit. Windows 7 is okay, but I told Dan he could load Ubuntu 10.10 on it in the morning. He did. 🙂 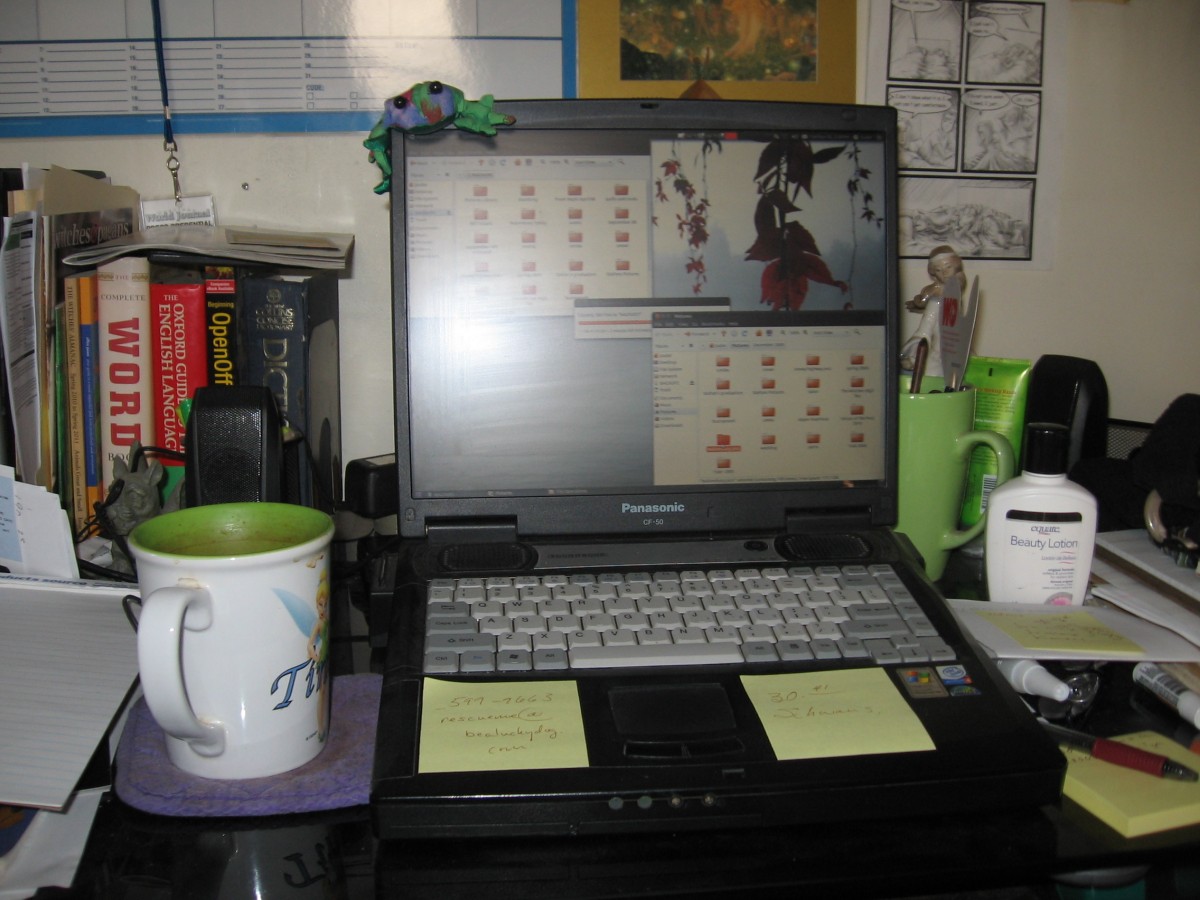 This is my old laptop. The CF 50 Panasonic Toughbook. It did pretty well, but it had major graphics card issues. 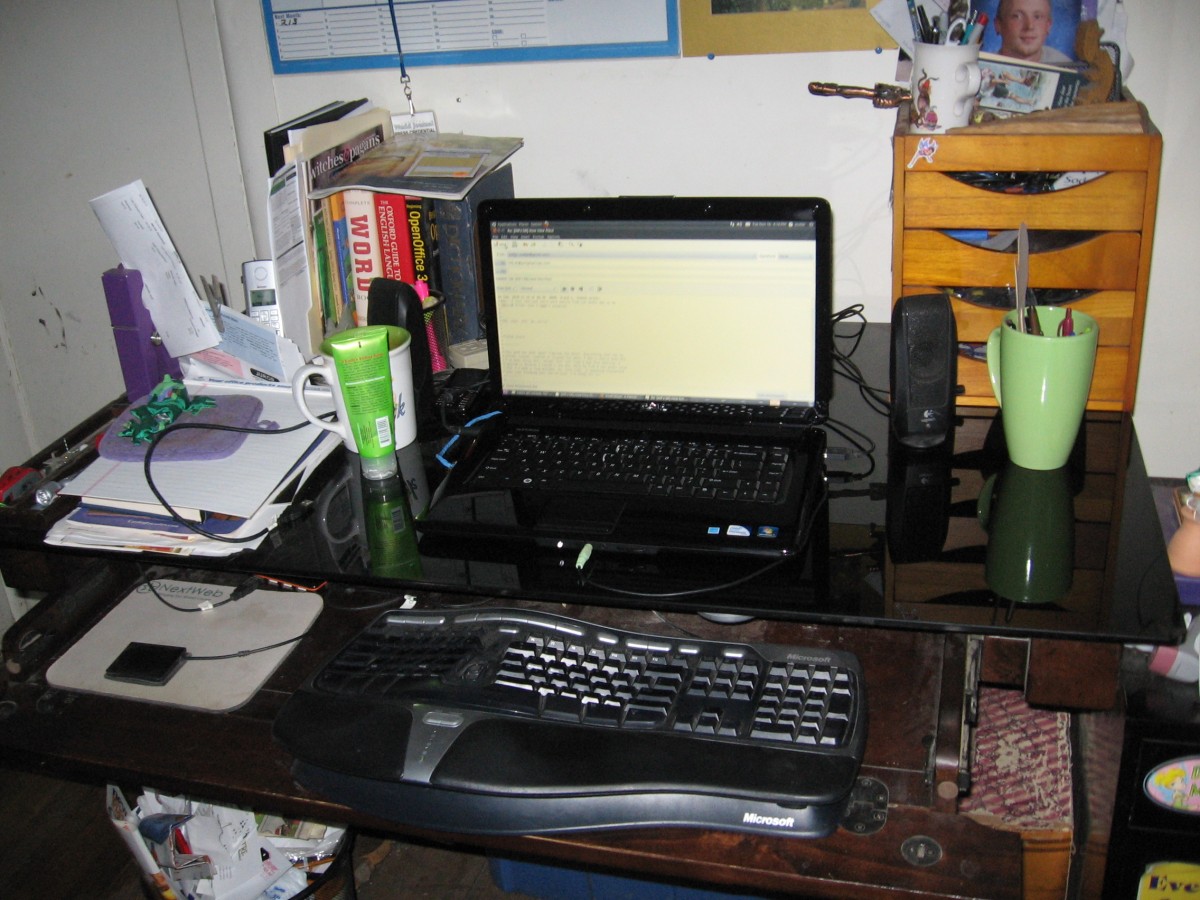 Here is my new computer. 🙂 I’m very happy. I just about have everything set up the way I need it. Now to just find time to do some writing!

I slept in. Then I got a backrub. Dan brought me maple cookies and tea in bed. Yum! Once I got up and dressed, we ran a few errands and I picked up my birthday card from my parents when we fed their cat Elway. (yes, an orange tomcat…. Mom is a Broncos fan) After that we came home and Dan fixed the sidelights while I moved chives around in the garden.

Then, Dan went off to teach computer class and I enjoyed peace and quiet. I wrote on a story, cruised the internet and read my email. Oh, and enjoyed lots of birthday greetings on Facebook. Dan came home and instead of cooking dinner, we went to Pueblo. Bingo Burger!!! Oh yum. We borrowed Dad’s truck, so Dan, Morgan and I had dinner. Morgan now loves Bingo Burger. I had the lamb burger with Pueblo chilies and mushrooms with a side of sweet potato fries. Dan and Morgan had regular burgers. We were all very happy and very stuffed.

Afterwards, we waddled to Staples, got some office supplies and then went to Barnes and Nobel. Ah, books… My parents gave me $10 for my birthday, and I bought a book. The Name of the Wind by Patrick Rothfuss. Looks very good. Then we drove home and returned the truck. I’m going to make my pecan pie tomorrow as I am just a tad sleepy. It has been a great day. 🙂

I swear that someone put speed in the water for the last two weeks of October. Last week was just crazy. Between work, school and other obligations, I felt like I was on a bullet train.

Wednesday, Spike got one of the cats. Didn’t know which one, as we couldn’t find it.

Thursday was suppose to be a day off. Ha! I went to KnitWits, my knitting group. We went to Pueblo on a field trip to visit Colorado Fiber Arts, a really cool yarn store. Then we had lunch at a place called Bingo Burger. I had a lamb burger and it was heavenly!!! Oh, and sweet potato fries with curry ketchup. Yummm… However, when we got home, Dan and I had to take the little gray kitten to the vet. Spike had ripped her lower lip off. Nothing to do for it, so we had her put to sleep. Dan also got a call from our one client in Denver. We wanted to borrow my parent’s truck. Not a problem except that Dad went to change the oil and couldn’t get the filter off. So after we put the cat to sleep, we went over to help Dad. Wheee…

Friday, we left right after I got done with work. Drove to Denver after a stop for lunch at Bingo Burger. More lamb burgers were consumed. Yumm!!! We arrived 10 minutes past when we said we’d be there. Not bad for city traffic. Four hours later we were done. Spent the night in a hotel and oh…. it was so nice to soak in a tub!!!

The next morning, we got candy at Target and then headed over to my sister Lori’s house. We visited for about an hour and I harvested 10 pounds of concord grapes. Yummm….. The smell was heavenly. Then we dropped books off at Isis and headed home. A stop in Pueblo for…. yeah, more lamb burgers. LOL… Only one down side of the day. We forgot to call my parents and tell them we were spending the night. They worried and were not happy with us, as should be expected. We apologized, and promised that next time we would call. Felt so stupid. Had to go do laundry as well.

Sunday was sort of a weird day. Tried to get things done. Handed out lots of Halloween candy, cooked down the grapes into syrup and worked on the computer.

Monday I went to work only to find out that my hours have been cut yet again. sigh…. It rained and slushed. Brrr!!! Then I had a ton of paperwork to process at the court house. And, Stefan’s house taxes are paid! Wheeee!!! By the time everything was done, all I really wanted to do was crawl in bed and sleep for a week. Instead, Morgan, Dan and I watched the Bounty Hunter. It was a riot.

Today was another run around like crazy day. Dan helped Dad unload and stack 2 cords of wood. Then we went and voted. After that, we did some errands around town. By the time we got home, about all I could do is make dinner. Tamale pie!!!! Lovely comfort food for a cool day. We ate dinner while watching Wolfman. It was a pretty good movie. Now we are watching the election results. The bad trio of amendments 60, 61 and proposition 101 did NOT pass. (phew!) The rest of the stuff is up in the air.