That I hate the phone. Marvelous communications tool that it is, there are days that I would rather it not ring. Of course, those are usually the days that I am VERY glad to have the damned box.

Early Tuesday morning, my two grandsons, Gavin, 4.5 and Talon, 2.5 woke up, broke down the baby gate, got frozen tv dinners out of the fridge and when they discovered that they were too cold to eat, stacked things up and got to the locks on the front door. They went for a walk. This was about 4-5am. They were picked up by the police about 1.5 blocks from home. They were taken back to the house and the police woke up Bryan. Katie was at work.  Of course, the police took the boys to the station, gave them clothes, toys, treats, movies, etc… Bryan got a citation for third degree child endangerment. DHS visited, the cops visited again, etc…. DHS checked out the house, said the back door lock was tight and shouldn’t be a problem, but they needed to get a chain on the front door.

Bryan missed work, they got the locks on the door and chaos was supreme. Bryan and Katie were aghast that the boys did this. Of course, living in Arkansas doesn’t help either.

Of course, they called me. A lot. Oh, and don’t forget the texts.

Yesterday morning, Bryan again wakes to the sound of police knocking at the door. The boys broke the baby gate again, couldn’t get out the front door, so they got out the back door. They only got half a block away this time. The same policeman arrested Bryan after giving him a citation for second degree endangerment. Katie of course had just gotten off of work and was dealing with the boys while Bryan went to jail.

Once again, the phone began to ring.

Many phone conversations later, including some which were NOT so pleasant, we find that Bryan had been released on his own recognizance. He was suppose to change clothes and get to work. What you have to understand is that Bryan works at a swanky country club in Arkansas. So does his brother Stefan. The chairman of the board of the club is the Chief of police. Stefan called in a favor. So, Bryan got out of jail, got yet another lock that was put on the OUTSIDE of the back door and then went to work.

As the dawn began to break, I wondered if 1) the boys had been kept inside or escaped again, 2) if Bryan or Katie got any sleep 3) if the phone was going to ring again.

The boys did stay inside. Locks, baby gate, Bryan sleeping in front of their bedroom door, etc. Bryan and Katie did get some sleep. Enough so that Bryan went to work. Today, he’s seeing a probono lawyer who also is a board member at the country club from what I understand, about the case. He is due to go to court on August 11th.

I have to admit, that the whole lawyer and police chief involvement gives me the creeps. Granted, the police rewarding the boys bad behavior bothers me too. Around here, things would have been handled differently. Even DHS said that the cops shouldn’t have arrested Bryan or given him a second ticket. sigh…

She came to visit! Her mom and stepdad are in town visiting family and we got to visit with Anabell for about 5 hours. 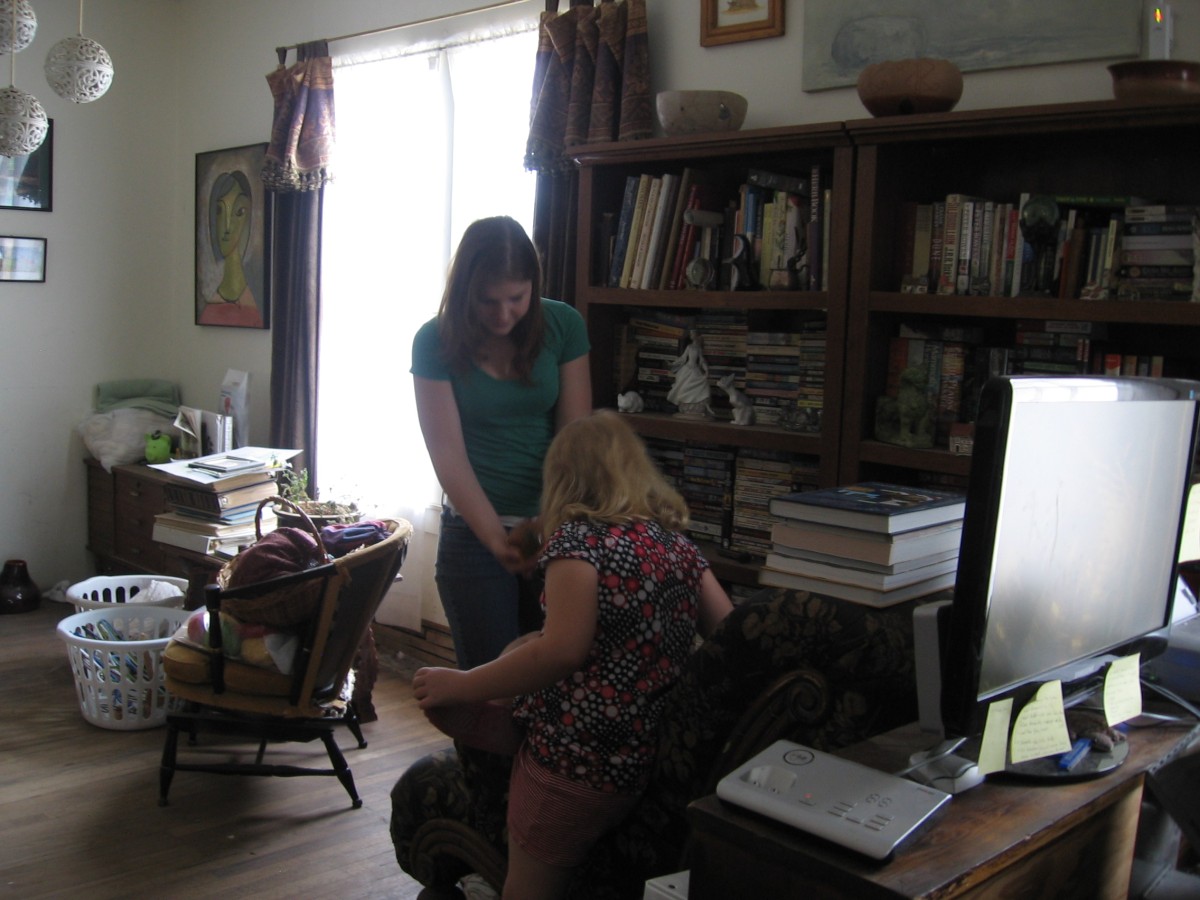 We made tortillas, burritos and then I made a carob mayonnaise cake. Morgan and Anabell put mint chips and carob chips in the cake as well. It was heavenly. After dinner, we watched Tangled. Plus I gave Anabell some of my dolls. A Navajo doll, some worry dolls, and a big porcelain doll from England that has red hair. Oh, and I found a book for her. She was in heaven.

Then today, Dan sent me a picture… he was teasing me the other day about having to rip out some of my knitting, which is called tink-ing. 🙂 (knit backwards) I laughed! 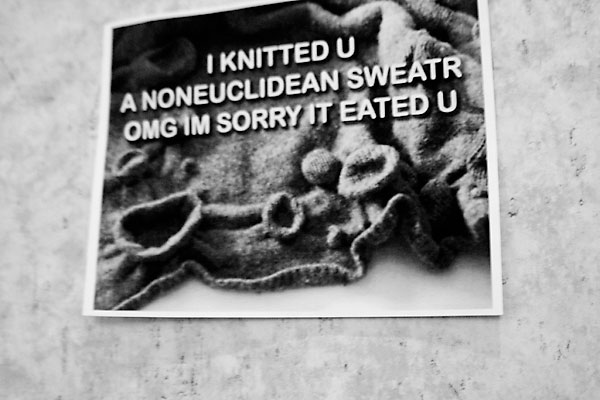 Life is a bit slow at the moment. We are trying to get the house cleaned up and ready for some major construction work. That includes the Wendy House as well. Do I have the energy? Nope! Not today. I’m a slug. Hmmm….. maybe that noneuclidean sweater ate my ‘get up and go’.

Yesterday, the 4th, we packed our camp up and returned to the 21st century. sigh…

Battlemoor was great! Probably should have been called BattleDUST, but we had a wonderful time. The rain on one day did help, and made  the dust/powdered cow patties settle. I swear we inhaled/ingested at least a pound of that dust. Ughh! However, the Stroh Ranch is a working ranch and there are cattle!

We arrived Wednesday and set up camp in a lovely little dell. Amazingly, it was only 50 yards from the Town Hall. There was a cool tree that had fallen and it looked all the world like the Pi symbol or a henge. While we were all part of the Shire of Villaleon, we were also in three separate areas. So, there was the main camp, Persia where Arty and Nyusha lived and then ‘the Savages’,… us. 🙂 Rather appropriate as I’m a Viking and Dan is um…. Lothar de Savage. This lead to many jokes. “Oh, that isn’t Viking,… Oh. Wait… you plundered that didn’t you…”  and “I’m a Viking. You going to hand that over or shall I just take it?” It was a lot of fun. We teased Lothar as his era didn’t write…. “Don’t worry dear, I’ll teach you how to write…” and other bits. “He’s a savage, be glad he’s wearing clothes… eats with a spoon… cooks his meat…”

The week was busy with a number of tourneys and classes. I learned how to tablet weave and to spin!!!! Oh, and how to write/send a letter. 🙂 That was fun. I took tons of pictures and they can be seen on my Facebook page. I really enjoyed the spear tourney. Dan of course was watching most of the tourneys. Between answering questions, making comments on fighting, patching up a few fighters and other bits and pieces, he got offered belts three times! So, while he didn’t accept a belt to be a squire, he will be getting his armor together and will be getting his heavy fighters card. He teased me at one point calling me his armor bunny. I about spewed with laughter. (an armor bunny is someone who helps their knight with armor, spotting weaknesses, etc.)

There were also courts every night and revels. (parties!) Thursday night was Hafla. Rolling Thunder played drums until probably 4am. Women belly danced, people chatted, good beer was consumed and everyone enjoyed themselves.

Friday night was Halls of Valhalla. There was a Viking ship where you could memorialize someone and then the boat was burned. We payed homage to Sir Starhelm. Once again, there was great conversations and lots of beer. I had one called Vikings Drool. It was a lovely dark stout. OMG! Oh, and there was a non-alcoholic ginger beer that was heaven, as well as a sarsaparilla to knock your socks off.  I drank more of those than the beer. 🙂

Saturday was the Medieval Red, White and Blue celebration. Everyone tried to dress in red, white and blue and still stay in character. It was a riot. The drummers played again and it was about 1am before I got to bed.

Sunday night was the Farewell Siege Revel. It was a time to eat and drink all the leftovers, say goodbye to people and unwind. It was another late night, but well spent.

Monday of course came Way Too Early. However, we broke camp in about 90 minutes. We said our goodbyes and headed home. Once we were home, we unpacked, showered, checked a few things on the computers and then crashed. I even got my article written for the Huerfano World Journal and pictures sent. 🙂 We napped from 4pm to nearly 10pm. We got up for a little bit of food and were back to bed by 1am. Damn we slept heavy! I have to admit that about the only thing I missed was my BED! So, we are planning on making a Viking bed for next year. Whether we make a Viking tent or a yurt is still being discussed.

Today we are putting stuff away, cleaning and washing things and trying to move. All the aches and pains have come home to roost. We didn’t get too badly sunburned, but there were lots of bites and Dan got all itchy from bucking bales of hay used at some of the battles. Yes, we clean up after ourselves so that the ranch can be a ranch.

Only a year till Battlemoor III. 🙂