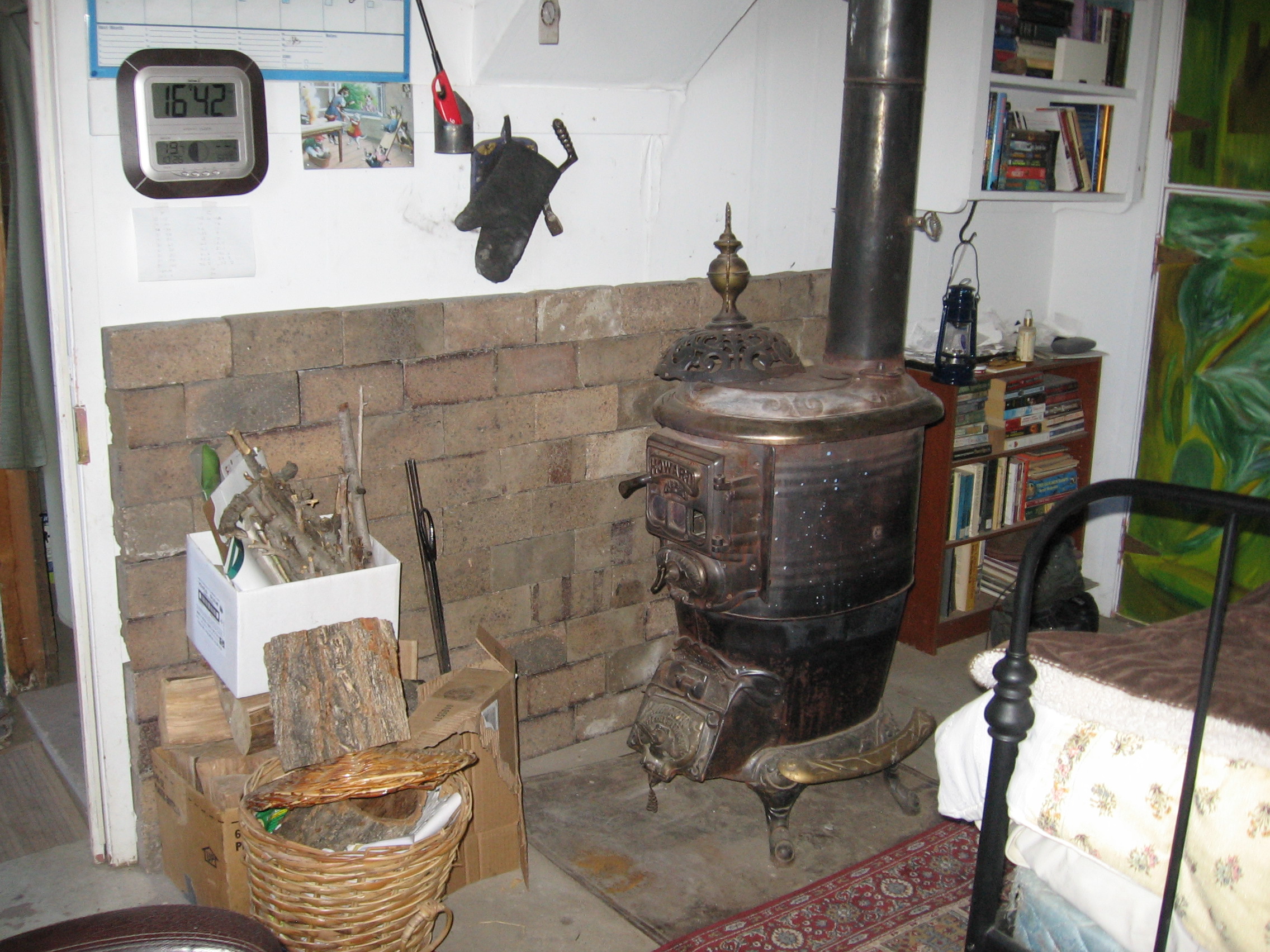 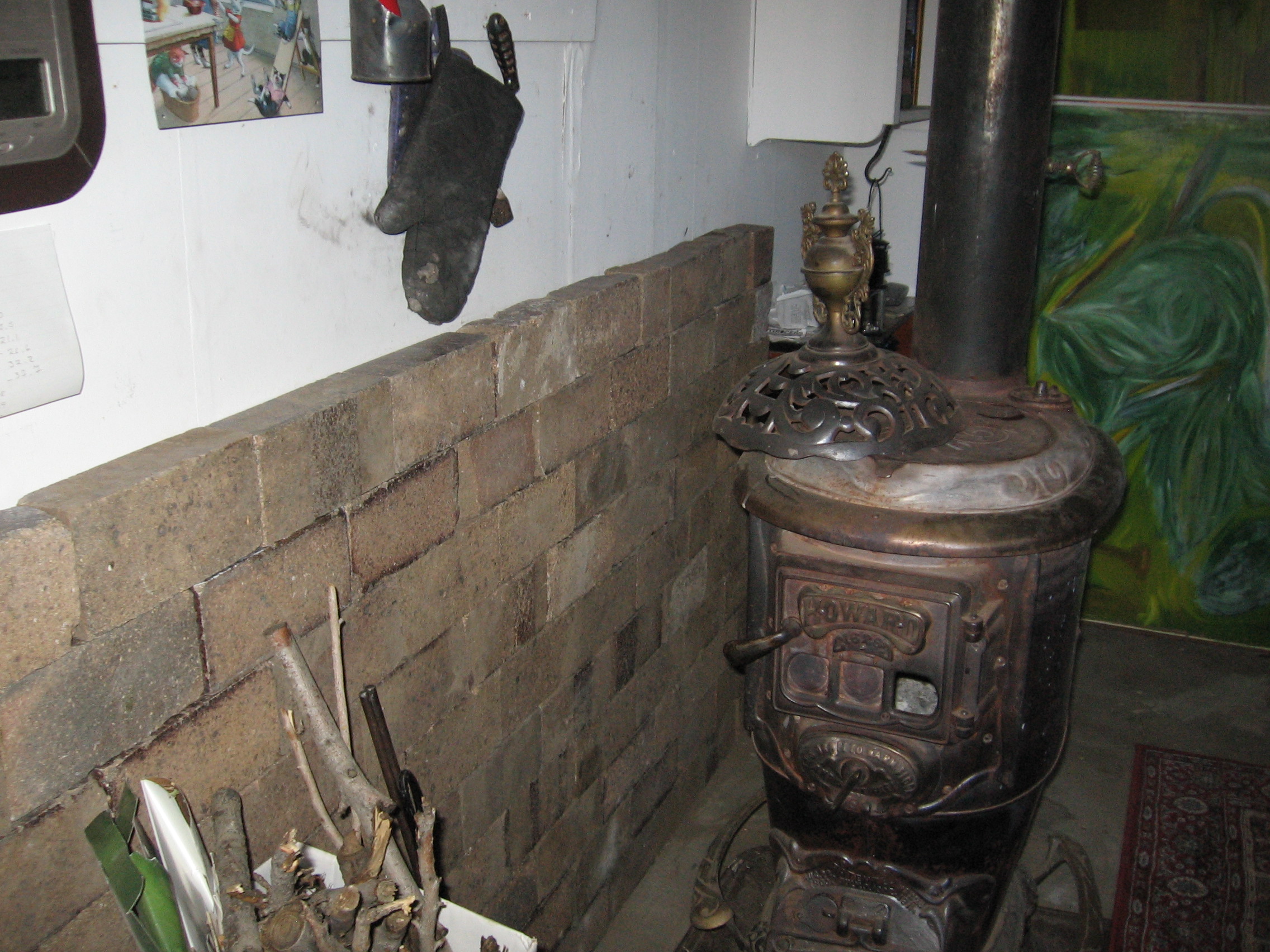 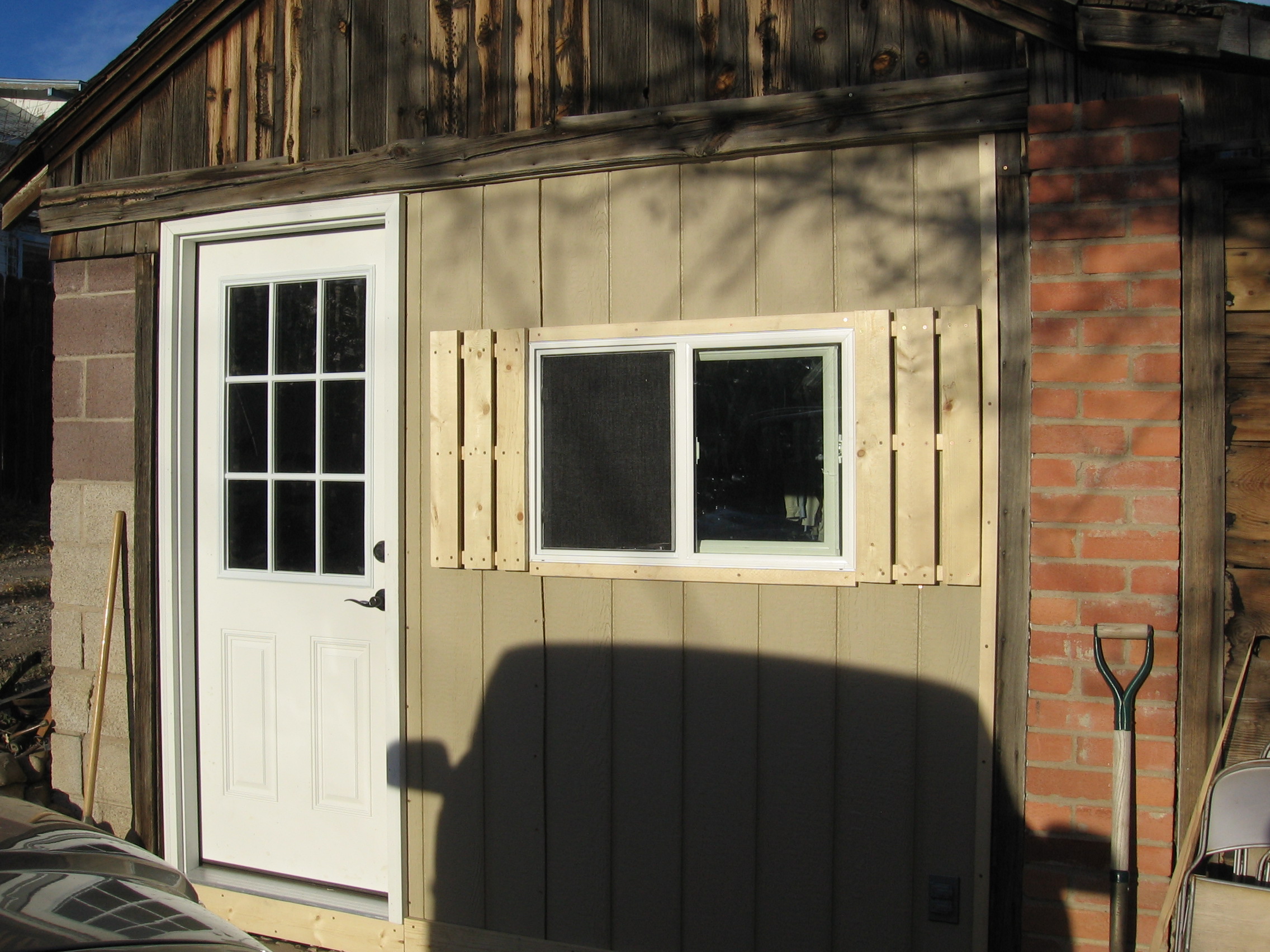 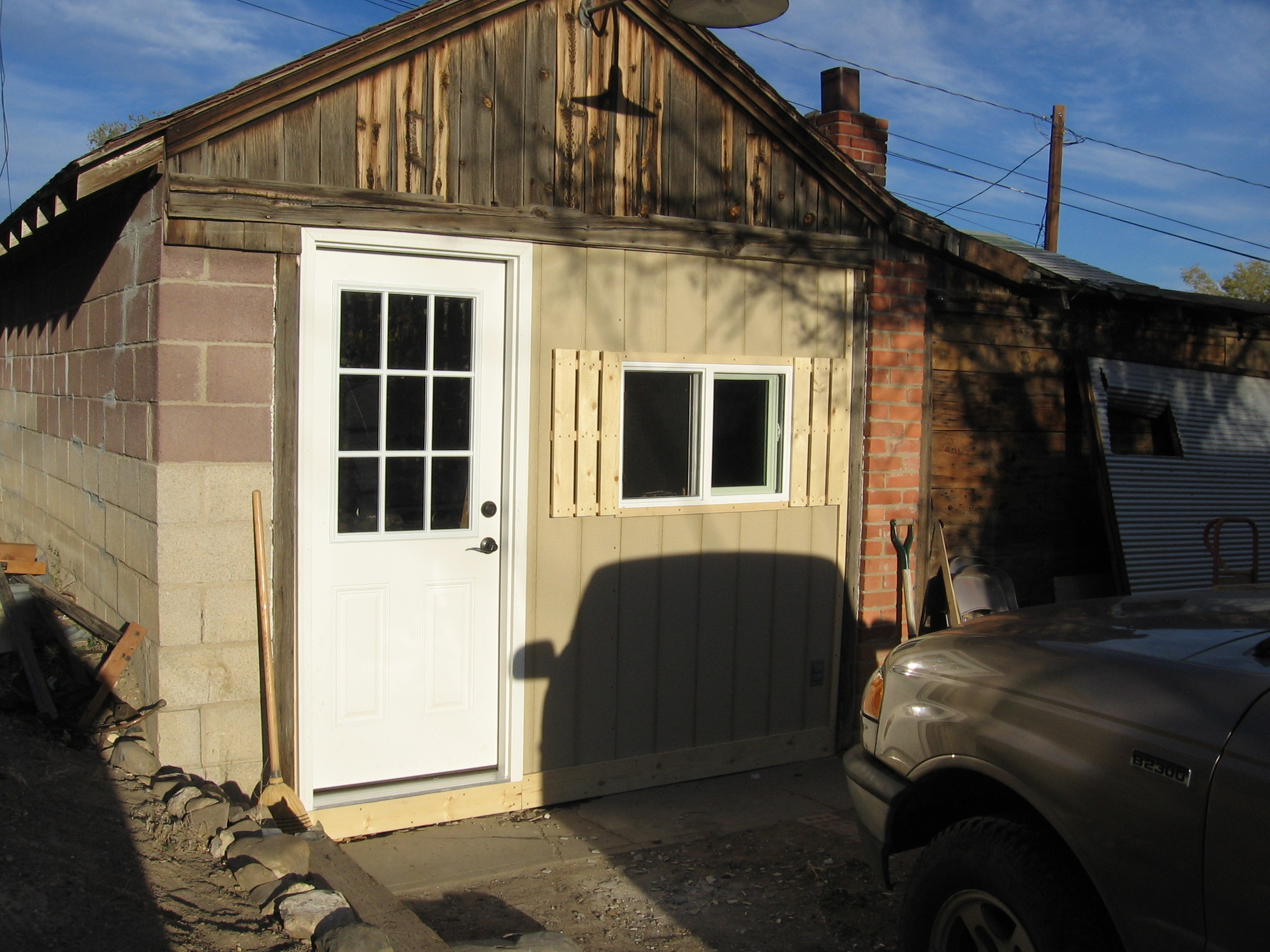 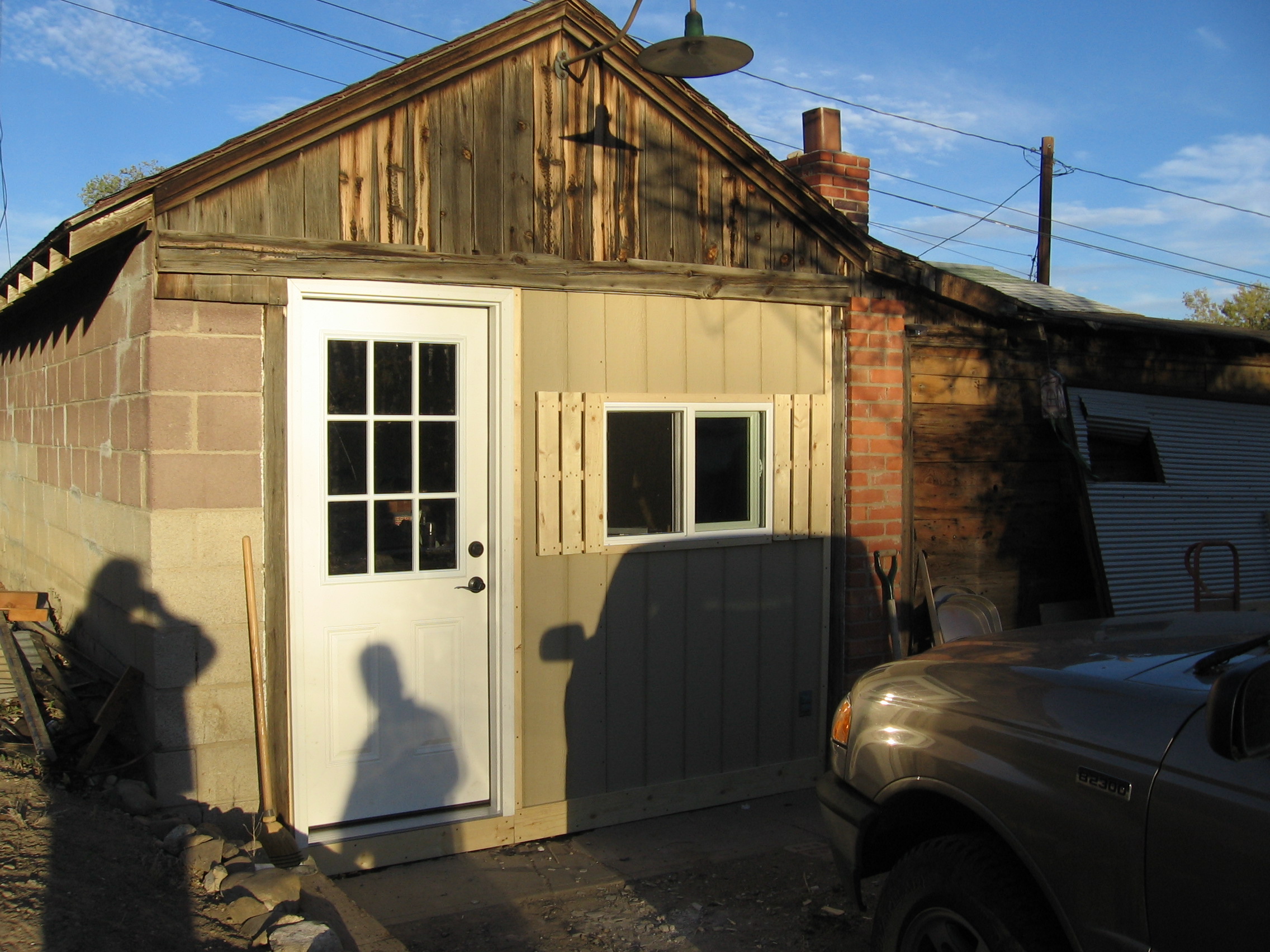 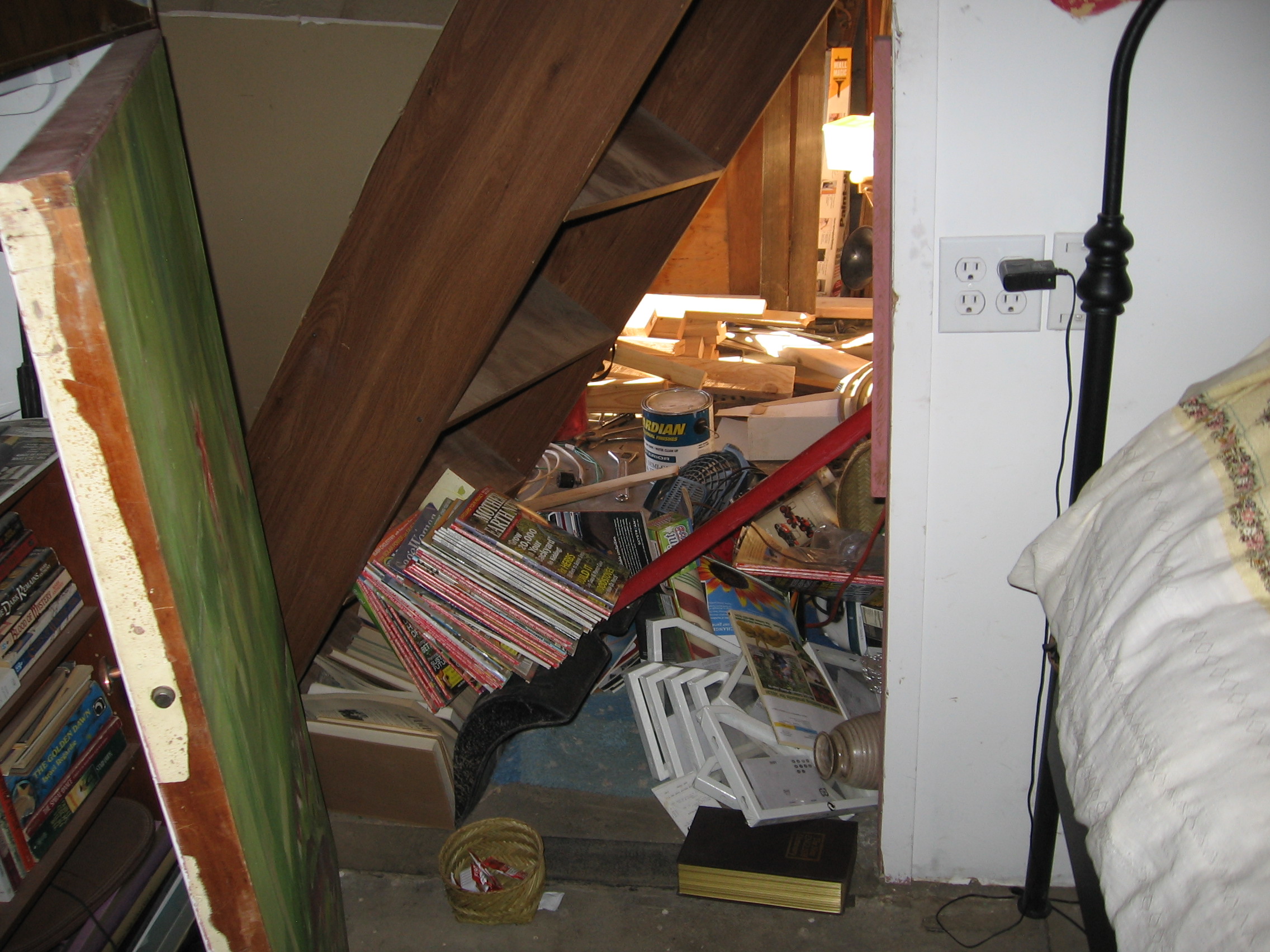 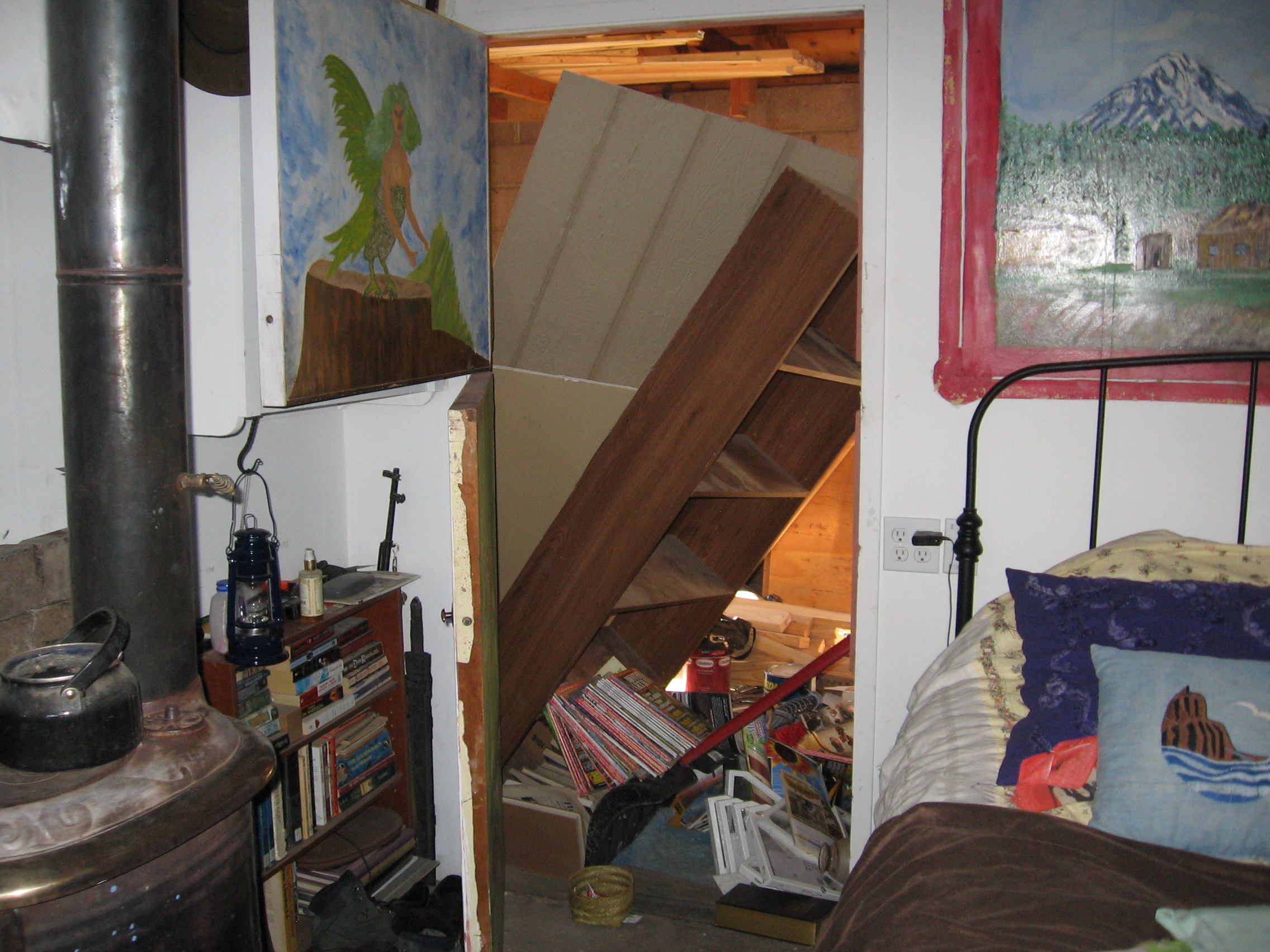 Well, by the time the weekend rolled around, the weather was back in the mid to high 60’s. So,… we decided to do some work on the Wendy House. First though, we had to go see Morgan. What neither Dan or I knew/remembered is that she wanted to come home for the weekend.

Bonus!!! We had extra hands to help with the work. So, Saturday morning at the crack of 10am, after a lovely breakfast of bacon and pancakes, we started the great destruction. Twelve hours later, we had 90% of the work done.

Sunday, after crawling out of bed by lips and toenails, we got moving again. We were fueled by bacon, orange rolls and plenty of tea! While Dan did some electrical work, Morgan and I tackled some outside work. We dug a ditch for a drain and then did terracing work on the driveway. The alley had been falling into the driveway for probably 3 years. Now, it isn’t moving… we hope.

After that, we drove to Pueblo for steak and then took Morgan back to La Junta. Dan and I took our sore and aching muscles to bed. 🙂

And for anyone who doesn’t understand why I call it the Wendy House… it’s a Peter Pan reference. 🙂

Tuesday night, on the way back from a candidates forum, we stepped outside into a gentle snow storm! Wet heavy flakes. We lit our first fire of the season in the wood stove and enjoyed the warmth as the world turned white.

We woke up on Wednesday morning to 4 inches of thick, wet snow. Gardner got 14 inches and lost power, so there was no school. I took some pictures. By the time we left for work, it was warm enough to not need a jacket. By the afternoon, you could barely tell it had snowed in town, although the Spanish Peaks were glorious.

We are suppose to get more snow tomorrow morning. I’m hoping it is light as we have construction work to do on Saturday.

Thursday night we headed for Denver for the Fall Conference and Delegate assembly. There was a lot of good information, and the assembly was short and sweet. There were good conversations and I got to see people that I enjoy talking with about school board and education issues. As usual, I took Dan with me. 🙂 He enjoys the conferences as well and participates which is great. It’s like having an extra board member with me.

Friday night we had planned to drive down to LoDo to have dinner at the Rio Grande. We were both too tired, so we ate at the Modmarket. Yum! I had a lovely salad. Oh that there was one in Pueblo!

Saturday, we finished the conference and then headed to a computer client’s house. We got to have our appointment a week early. 🙂 This means we can go visit Morgan on the 18th. Then it was off to IKEA.

Yeah, we’ve been there a lot lately. This time we picked up the light fixtures for the Wendy House. We got these cool lamps. I also found some cheap rugs for entranceways, light bulbs, a couple of holiday candle lamps, and fabric out of the discount area. 🙂 Once the fabric is washed, I’ll be making adjustments and will have curtains in the kitchen!

Sunday, we should have been doing work on the house. Instead, we went to Pueblo and went to Target and Home Depot. We were too tired and brain dead to do any actual construction. That will happen this weekend. Just in time too, as it is getting cold There was snow on the Spanish Peaks this morning. We had a cold slushy rain in town last night.

The last week has been busy. We’ve been doing lots of home improvements and we went to SpaceUp Denver. While the weather is good, we are working on replacing the garage door with a door, window and wall. We’ve cut all the joists to level the ramp and make a real floor. Then we got the chance to go to SpaceUp.

We went up the night before and stayed at the Hotel VQ. It’s this sort of geometric hotel next to the Bronco Stadium. Dan called it the 14 story Yurt. 🙂 It was. Better yet, as I was looking at the hotel layout, all I could think of was 1) Adafruit Flora and 2) Ironman’s reactor. We giggled a lot.

SpaceUp Denver is an Unconference. There were about 25 people there, and I was the only woman other than SpaceUp staff. Oh well. The speaker, Dr. Alan Stern was interesting. We had another gentleman speak on Citizen Scientists and then Dan spoke on Mach 30 and ODE.

Best bit of the whole day though was the Trivia quiz. You could get two points of you answered it without prompts and 1 point if you used the prompt. Well, Dan was wizing through the questions, so I just listened. Then they asked…”Who was the 1st American in space.” I KNEW that Dan knew the answer, so I didn’t even check. Especially after he’s been working on the Shephard Test Stand for almost a year. Even I knew that it was Shepard.Then the prompts go up and Dan gets this funny look on his face and I realize…. Mr Always has the RIGHT answer had gotten it wrong!!!! I laughed! It was great!

When we finished, we visited my sister for an hour and then went to IKEA. We found a sink for the Wendy House for 1/2 off. It was a great end to a lovely visit.

And yes, I am still laughing about Dan’s wrong answer!