Daniel brought Spike over to play with Blanca and Brandy. Oh how that pup has grown.

I can barely lift him now as he weighs nearly 45 pounds.  Our new cat, Shadow wasn’t too concerned that Spike was around.

She just laid there snoozing while Spike, Brandy and Blanca ran around like three little kids on a sugar high. It was hilarious.

Daniel wanted breakfast, so we made a big breakfast. Daniel cooked the bacon while I made the pancakes. Daniel had three eggs too. It was heavenly!

He will probably get mad at me for posting his picture, but he looks good. Dan and Daniel talked about him going into the Marines. Eeeep! As a mom, I’m allowed to get wigged out. sigh…. At least I know that of all the boys, Daniel will probably handle the military the best.

Yesterday, it was almost 55 degrees. And let’s not forget the rain…. Lots of it. With more to come. Makes me wonder if it would be prudent to build an ark…. Oh, and of course there was snow on the Spanish Peaks this morning. It warmed up briefly, but…. I’m still running around in a long skirt, denim shirt and wool socks with my sandals! Brrrrrr.

All jokes aside, it is wet, with more rain due later in the week. Not our normal end of May weather. In some ways, this is good, because I have been indoors doing college work. I have my first class in mid session and I think I’m doing alright. Even learned how to do power point programs yesterday. I have one to do for class next week.

Right now though, I think I’ll curl up with a book, a blanket and a cup of tea.

Here I am thinking about how I won’t have to get up at the crack of dawn for three months to drive Morgan to school. Then I got to thinking about all the garden work (two houses, community garden bed and the vet’s nursing home beds), house repairs, LoboSavvy, college and maybe, just maybe… I might get a job. Damn! There went my free time. Oh well. Not that I really had any to begin with.

My day so far…

Now, I still have dinner to make, dishes to wash, more laundry to do and start all over again at 6am. Last day of school. Then I can sleep until 7am. Wheeee!!!

We have another pregnant cat. Lyra the one tabby. We moved Shadow over to 520 in hopes that she isn’t preggers. I’m not betting on that one. Not sure what we are going to do with all the kittens. Stella had 4 and one is spoken for. And when it comes to stupid animal tricks, my dog Blanca howls every time the train whistle blows. Not fun as there are an average of 30 trains a day… And Blanca is afraid of thunder and lightning. (can I go home now???)

I’ve had to get use to dual booting my machine. Not happy about it. Really not happy about using Windows, but… CTU only supports Windows. grrr… Probably would have had to do it anyway. Dan wants to do training and that means we need to be able to work in all computer operating systems. sigh.  I now run Windows XP and Ubuntu 9.04.

Last but not least, the library is having it’s grand opening June 25-27th. As John is assistant director, that means I get to put on fancy dress clothes. Haven’t decided if this is a good thing or not. What it does involve is me hauling out dress patterns and making myself a nice Formal style outfit. Hmmm…. maybe that velveteen and chinese silk print might have a use after all.

Bryan and Stefan sent me pictures!!! 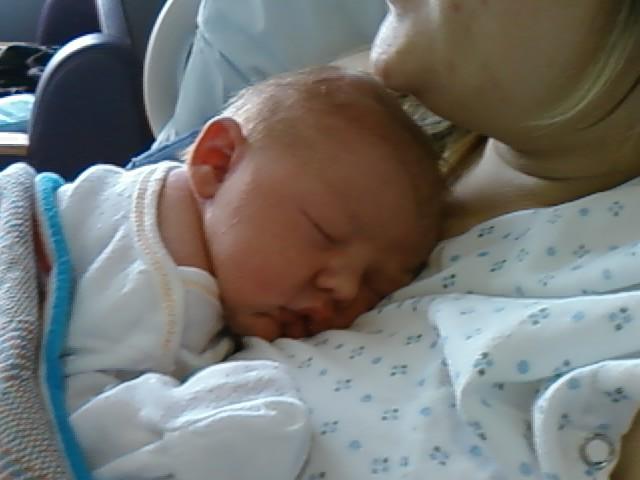 I have a bunch, but will upload the best.

It was really cool to have all the pictures when I got back this morning from paying bills. I did the happy Nana bounce as quietly as I could, because Dan woke up with a sinus headache. However, would he stay in bed? No!… silly man.

So, he worked half heartedly all day.

Around 1pm, I went out to the nursing home across from Lathrop Park and helped some of the people plant a garden. They have two areas to garden in out there. I helped Inez and Grace plant the flowers. Two 4×8 raised beds and 4 tire planters. These are made from tires left on their rims and cut then folded out to form pots. Very cool. :>

I got back around 3pm, and Dan was still trying to work. Sigh. Heading to Pueblo tomorrow should be fun…

Oh! Last but not least, I have officially started college! CTU. A bachelors in Business Management. We shall see how long I last!!! Hopefully, all the way to a Masters…

Yesterday, we’d had enough. After the marathon of phonecalls over the new baby, we just couldn’t cope with the phone. So, when lunchtime came around, Dan and I grabbed waterbottles, apples. pen and paper. Off we went to Lathrop Park. It’s only 3 miles down the road, and we have a park pass. So, we drove out and climbed up on our favourite rocks.

We worked for a bit and then climbed around on the rocks for a while. There are all sorts of bowls and hollows carved by wind and water. In one of them was an area big enough to lay down. We were looking at that when Dan suddenly said, “Jaye, Don’t look!” Too late. I saw the snake. ::::shudder:::: However, Dan looked again and said that it was only a bull snake. It was about 7ft long. Not that this made my jitters much better, but it helped. I went around to another section of rocks while Dan took pictures.

We went back to working for a while, ate lunch and while we were eating, we heard someone coming up the trail. By the time we looked, the hiker was about 50 yards away heading up the hill. It was Dad!

We finished about as much as we could do without computers and headed back to the car. Dan saw this cactus which was blooming.

We walked down by the amphitheater and onto the road heading to the parking lot. Now, after one snake sighting, I’m looking for them. I Don’t Like Snakes. I’m looking from side to side. No snakes,… no snakes…no… OH! MY! GODS! RATTLESNAKE!!!!!!!! just to the right of me. I must have jumped 3ft in the air and 3ft to the left all at the same time. Nearly landed on Dan who was in the left hand rut. Dan of course went back to look at the snake which was rattling for all he was worth.

He was one pissed off snake. Dan was afraid to leave him that close to the road, so he got a branch and moved him up under a treel. That snake was really pissed then. Once Dan was done, we walked back to the car and headed to the ranger station to tell them that there was a snake that close to the campers area. Lathrop has LOTS of rattlers, but that is a very public place and not a good spot to have a peeved snake.

We went home after that, and as my brain was good for nothing, we headed to Pueblo to do some of the grocery shopping.

Talon Daray Thomas was born this morning at 9:44am (cst) He was 8 lbs, 15 oz and 21 inches long! Dark blonde hair and blue eyes. Oh, and he was about 3 weeks early. Katie is doing fine after the c-section and Bryan is a happy but tired daddy.

Katie, Bryan’s SO keeps going into labor. She isn’t due till later in the month, but apparently, this baby really wants to arrive. Like last week. They live in Searcy, AR, which makes it difficult to deal with the whole long distance Nana thing. They live next door to Stefan, so I have a cluster of grandbabies right there. Anabell, Gavin and this new one. sigh…. Bryan has called every time they’ve gone to the hospital, because it is driving him nuts that she is in pain and he can’t help her. The dr. is doing an amniocentesis to see if the baby is ready or not. I just hope things hurry up before Bryan looses his cool.

May is a crazy month. Regular school is ending in less than 8 school days. Wheeee! However, for Dan and I, things are going to speed up. Dan is going back to college-CTU. We are also working on our business, and I still haven’t found work. I really don’t want to have to head for 7-11 or the Acorn. To be honest, I’d like Dan to take a turn at being the provider for a  bit.  We shall see how it goes.

The weekend has been crazy. Morgan has spent most of the weekend at 520 with her Dad. That meant cleaning up a bedroom, just as we are getting ready to finish up the drywall in the closets. Then Dad was doing his first evening program at Lathrop park. A slide show on the history of Walsenburg and Huerfano County. Very nice except for one thing. His computer freezes at times, so he borrowed mine. (aieeee!!! withdrawl symptoms!!!) So, we spent a lot of time over the last few days getting my computer up and running. I had just changed it over to a dual boot machine. Uggghh…. Have I ever said how much I detest Windows???? Oh gods….. Never ever realized just how much I appreciate my Linux OS. Ubuntu, Fedora 10, either is heaven in comparison. However, Dad and a few other reasons compel me to dual boot.

We got his stuff all ready and then we went to the El Fandango performance at the Fox Theater. Matt is a dancer in the group. I’m not sure he thought it was the best idea at first, but…. It has turned out to be a great outlet for him. They all did really good. Gretchen, my cousin and her friend Mary Jo run the program. They have dancers from about 5 up to 16 dancing. We all enjoyed it.

Came home long enough to cook dinner and grab Morgan before heading out to Lathrop State Park for Dad’s program. There were about 14 of us, which isn’t bad for a windy cool May evening and very little advertizing. Dad did a great job. It was very cool to hear him give a program. The last time I saw him was probably 10 years ago at the Grand Canyon.  We helped him pack up and then headed home.

After making a cup of tea, we sat down to watch the Hunted with Tommy Lee Jones. Very intense movie.

This morning, I slept in a bit and then got started on the day. As soon as Dan gets back from La Veta, we will start the drywall mudding and taping. I hope….