The sun is out at last. School is canceled. Yet we need to dig out and visit a computer client and check on my parents. What a storm. I love all the snow and took pics as Brandy barked at the birds and I shoveled a path to the main house. With all this snow, 12-13 inches, we might get an inch of moisture.

We woke up yesterday to just a bit of snow. More wet dirt than anything. Was it a non-issue? Had the weathermen failed? We watched over the morning. The clouds rolled in and a few more flakes fell. We were sad that our event, Corazon, had been canceled, but figured it was for the best.

Late in the afternoon, the snow began to fall heavily. It sounded like rain on the roof, but it was snow. Then the flakes became big and fat. Full of moisture. Dan stepped outside and took a few pics.

This morning, we got up to Winter Wonderland. Here are my pics from about 10am. You can see the depth of snow change in the pictures. Oh, and it is still snowing.

We are under a Winter Storm Warning. One that had people scrambling for groceries, firewood, batteries, etc. It even canceled our SCA event, Corazon. I took my mom to the grocery for a few things and then for a bit of a drive. It was crazy. Oh, and 62F was our high temp today.

When I got home, I made bread, a plum cake and then a casserole. While it was baking, I helped Dan with the firewood. We heat with it, and we’ve been whittling down a ‘hedge’ of pine. Today, we cleared the last of it. What wasn’t chopped, split, or stacked went into the compost bin. It was so strange to see the yard clear. By the time we came in, it was 38. We now have a bunch of firewood. 🙂

Since I posted last, we’ve had a bit of snow. Nothing like my friend Kirsty, who has 7 feet in her front yard. She lives in Massachusetts.

I’ll post pictures if we really get the snow they say we will.

Stunned. Smiling. Flabbergasted. While I wanted to give back to the sewing/costume community that has fired my imagination, I never expected the boom in stats over a hat. A hat that drove me crazy trying to get it done. I was beginning to think that I’d never manage it. 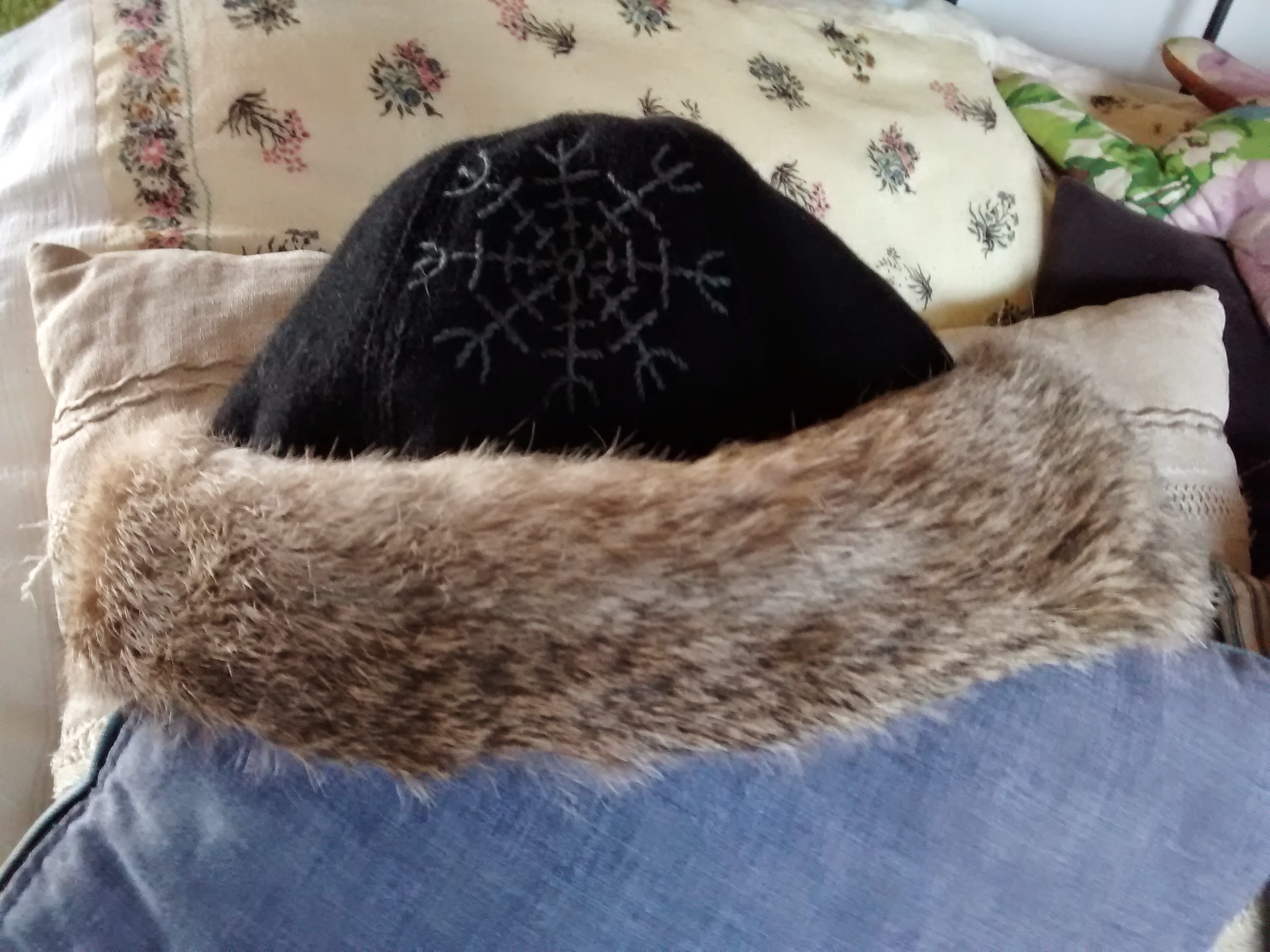 I did though, and wrote up a tutorial. I’d had people ask me about Viking Hats, and figured it would be easy enough to document how I made them. Once I did that, I updated the Viking Hat page and added the tutorial. Then I posted the link on Facebook and G+.

I figured maybe 50 or 100 people would ‘like’ it and a quarter of that visit the blog. That’s been the average when I’ve made other things, like tunics or apron dresses. That was on February 2nd. Since then I’ve had over 2000 views on the hat. 🙂 (about 1000 actual visitors)

It’s February! Wheee! Tomorrow is Groundhog’s day, and if he says another 6 weeks of winter, I may scream. Or cry. Or whimper. We did have a few glorious days where the weather got up to 65F for one day and others in the 50’s, but today we are back to snow, cold, 29F weather. Brrr! At least most of the storm yesterday was rain and it didn’t turn to snow until late last night.

That was appreciated, as we were chopping firewood. Our friend Mark stopped by and gave us a small load of wood. He said that the ‘wood fairy’ had told him were were short of wood. He was right. I was so stiff this morning, that the prospect of getting up was daunting! No choice though, as it was a Bob & Earl morning. Bob & Earl’s is a little greasy spoon cafe in Trinidad. My parents found it and fell in love with it. Now that we are their designated drivers, we take them to breakfast about three times a month. If the weather is good. Luckily, it wasn’t too bad today. On our way down, we saw a bald eagle sitting on a fence post. In fact, he was still there when we drove home.

B & E’s is sort of the Cheer’s of the cafe world. Everyone knows you. We were an hour later than usual, and when we walked in, Holly the waitress looked at us and smiled as she said, “You’re Late!”. We all laughed. As she brought us our drinks, she took our order. “Now let’s see… Jon, you want a Mexican biscuit and two links. Carolyn, waffles or an egg with bacon, and sourdough toast? Right. You (Dan) want a Mexican biscuit, no onion, but extra cheese, and you want a breakfast burrito, no cheese.” Then she walks off.

Breakfast arrived 20 minutes later. Ahhh heaven. After breakfast, we dropped my parents off, got some groceries and then headed home. I’m updating blogs while trying to resist curling up for a nap.

Other highlights… We had a couple of ice storms. Slippery, nasty things! Beautiful for pictures, but dangerous.

We took Morgan up to CSU, Ft. Collins, and she is doing well.

I’ve been making hats for the Clothing bank at our school, and helping clean up Washington school so that the community and the school district can use it more.

The district’s finance manager retired. This has thrown the district into a tizzy, but we will survive. We’ve had a bunch of meetings as of late as well. A BOCES retreat, workshops and lots of committee work.

We’ve also been doing a lot of clean up around the house and yard, getting ready for SPRING! (ie, the warmer snow season) We cut down a tree out front that was just so scraggly and stacked the wood to burn next year. We are planning a greenhouse as well.

Last but not least… We have an SCA day in 3 weeks. I’m considering a new outfit. I have the fabric, but not sure if I have the time to complete it. We shall see.