Two weeks ago we had snow. Today it is 83, and even the breeze is a tad warm. My backyard looks like a jungle, and I will have to pull tons of weeds just to find the patio. 🙂 I plan to do lots of yard work tomorrow. (insert giggle)

Friday, I went to see the school lawyer. We had a good chat and worked out various contracts and other bits and pieces. Afterwards, I indulged in a bit of retail therapy. Yes, I went shopping at Joann’s. I bought a bunch of fat quarters for a prayer flag swap I’m hosting with my online quilting group, QuiltersCoven. (350 online crazy pagan quilters.) I think we have 10 or 12 people participating. There was linen on sale, but I didn’t have the cash for it. sigh…

Saturday, we were sort of stuck, as it was rainy and damp. 🙂 Dan suggested that we head up to Pueblo and get that linen I hadn’t got the day before. I’m terrible about buying stuff for me. In the end, we got $180 worth of linen and thread to match for about $88. Rust, teal, navy blue and cream colored linen.

Sunday was suppose to be a sleep in and catch up day. Projects for the Wendy House and other things. Instead, we drove out and ‘rescued’ my parents. The oil and check engine light had come on and Dad pulled over. When Dan checked, there was less than 1/4th of a quart of oil. Three quarts later, we got them home.

My parents were suppose to head up to Littleton on Monday. However, the Subaru needed to be checked by a mechanic, just to make sure there were no hidden issues. That meant I drove my mom up to Littleton. We left around 9am. Listened to Old Blind Dogs on the stereo, talked and had a good time. I visited with my sister and her family, and picked up about 1/3 of a cord of wood. They had just chopped down a tree, and I said I’d take it. I’ll pick the rest up on a future trip.

While I was gone, Dan did some work on the Wendy House. He built the sink base for the bathroom and opened up a vent between the bedroom and living room. He also cleaned up the back porch that we use for a shop. Now to re-clean the herb room where he piled all the stuff that doesn’t belong in the shop!

Today, I’m catching up on a three day absence from the computer. 🙂 It was kind of nice. While I was reading email, I had a bird fly in the door, around my desk three times and then out the window. Tonight I have a school board meeting and tomorrow I’m gardening!

I am fried. Brain dead. Zombified. Tired. The last few weeks have been plain crazy. Between lots of meetings, temper tantrums, weather, a Superintendent Search, three graduation ceremonies, Ludlow, oh, and trying to work on the house, I’m toast. It’s also cold! We had a really intense rain/hail storm yesterday, and today is cloudy and cold. (55F) I’m waiting to see if we get more rain.

Last week we had a board meeting in Gardner that was a long and rather hectic event. Then there was the high school graduation and the Ludlow Centennial event. This week we had yet another long board meeting. This was a rehash of some of the previous meeting and work on the superintendent search. Wednesday was Gardner 8th grade graduation at 1pm, and Peakveiw’s 8th grade promotion ceremony at 6pm. It made for a very long day.

I also did some gardening work. Well overdue! I planted everything that had been living in the house because of the bad weather. I have Russian sage, raspberry canes, flowers, herbs and of course, my garden guru, RedTom.

This evening we have a retirement party for 5 or 6 teachers. Friday, I meet with the school lawyer to discuss contracts. After that, I’m curling up with a cup of tea, my book and only answering the phone if there is an emergency! I’ve got to recharge my mental batteries as there is yet another school board meeting on Tuesday!

This year marked the 100th anniversary of the Ludlow Massacre. It’s been a year of events, memorials, services, and all sorts of activities. On May 18th, the Centennial Commemoration and Remembrance was held.

As to be expected, there was a heavy Union presence. This point in history was a turning point in labor relations. We had UMWA members from all over the country present. It was a good day. After a number of speeches, songs and shared emotions, there was a barbecue lunch and commemorative medals. Dan and I each got one.

After the event, we drove up the canyon and visited the memorial at the Hastings Mine. We continued on up Delagua canyon and got home around 5pm.

More of the white stuff. The pictures don’t do justice to the big white flakes that were falling. The cat was peeved that there was snow in his dish, and we will lose branches from the heavy wet snow.

Here are the gardening pictures. Also included are pics of Dan’s office which he finally cleaned and the sock I’m knitting for Morgan.

It’s so quiet at the moment, I can hear the sound of snowflakes shushing across the roof. Yes, SNOWFLAKES. Third Winters anyone?

The week was busy. With Morgan home, we did a lot of things together. Ate out, watched ALL the Harry Potter movies, played on our computers and watched Morgan sleep. Amazing how much a college student sleeps! 🙂

On Saturday, it was 75! We did lots of gardening. Mowed the lawn, pulled weeds, moved rocks, moved more rocks, picked up trash and repotted a bunch of plants. We crawled into bed smelling of aspercreme and groaning like we were 90.

Sunday, we knew it was suppose to be cold. It’s why we didn’t plant anything outside. We made bacon cinnamon rolls for breakfast. yum!

As the day wore on, it got colder and colder. Then the thunder and rain began. Soon after, the snow. Yes, snow. In May! Have I mentioned that Colorado is menopausal this year? By mid afternoon, it was really snowing. 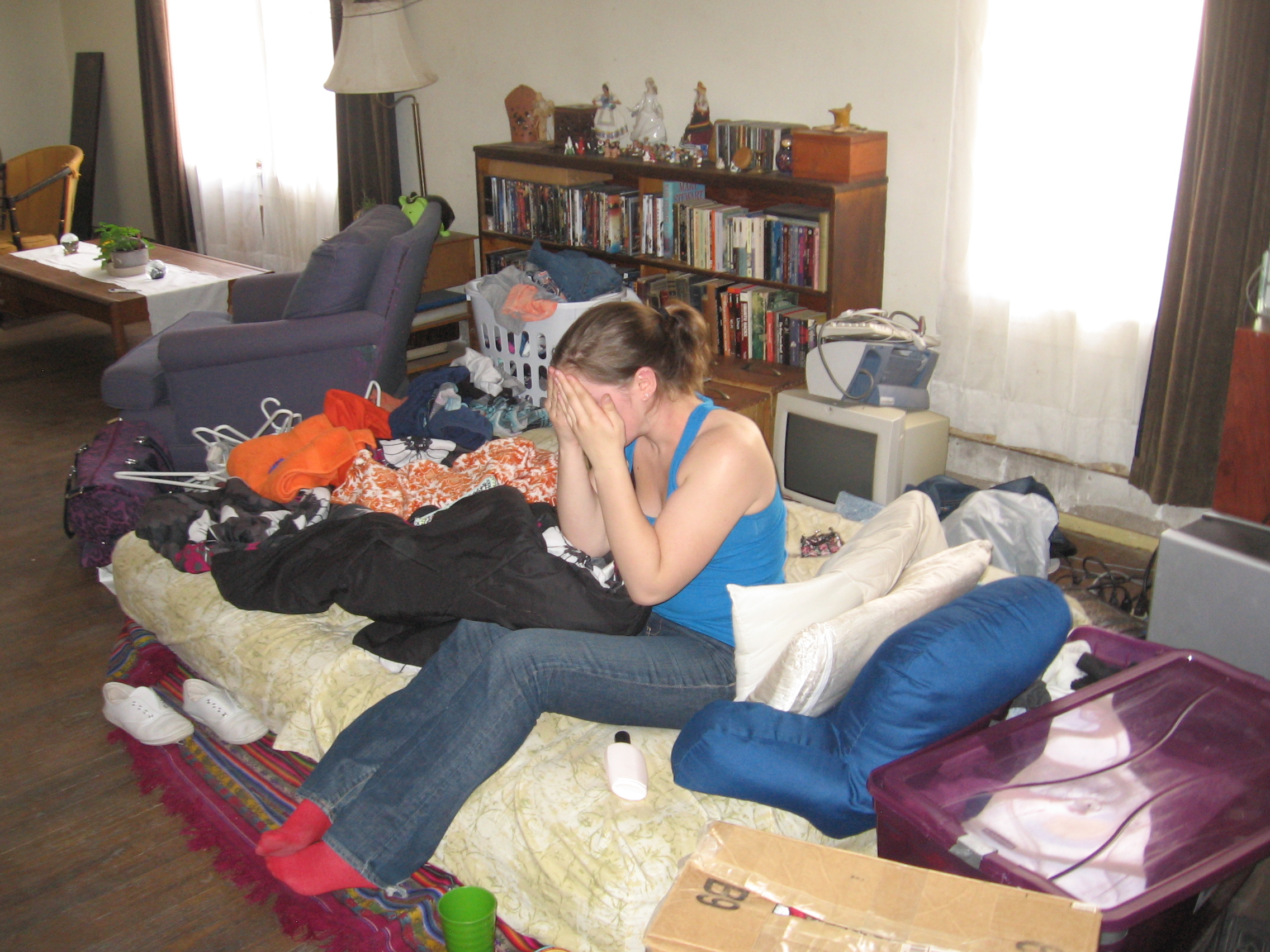 Morgan packed for her trip to California. Around 5:30pm, we left for Pueblo. As we drove north, the snow slacked off, which was fine. However, the winds made up for it. We had dinner at Chili’s and then met Ashleigh and her parents at the bus stop. We chatted and made sure the girls got on the bus for California. Then the drive home. Ugh! You know how in sci-fi movies they have the star fields that move towards you? Well, that’s what it was like all the way home.

This morning, we woke up to 8 inches of snow in our yard. It’s still snowing. It’s suppose to snow tomorrow too. Can we have our warmer weather back? I know we need the moisture, but how about rain? I’d like to plant out my rhubarb and raspberry canes before July.

I have lots of pictures, but I’m going to divide them into separate posts.

Yeah! We were just a little pumped. 🙂 Up early, on the road by 8:15am and in La Junta by 9:30am. All dressed up and just waiting to see Morgan graduate. 🙂 Nearly three hours later, we watched our girl get her diploma. Associates of Science degree. Lots of pics, lunch, and then the packing.

Yes, she was so twiterpatted, that she didn’t get packed. LOL! We helped, and by 6:30pm we were finally on the road. It was late when we got home, and we left most of the stuff in the truck overnight. The pizza left over from the night before disappeared as if by magic. 🙂 Starving college students, who knew?

Now our living room looks like a bomb hit it. Girl stuff everywhere. Boxes, bags and bedding. All with a girl in the middle. 🙂 It won’t be like that for long though. She’s off to California with her friend for a few months.