Yes, Matt graduated the 8th Grade today. He survived Nancy’s class for two years. I’m so proud of him. 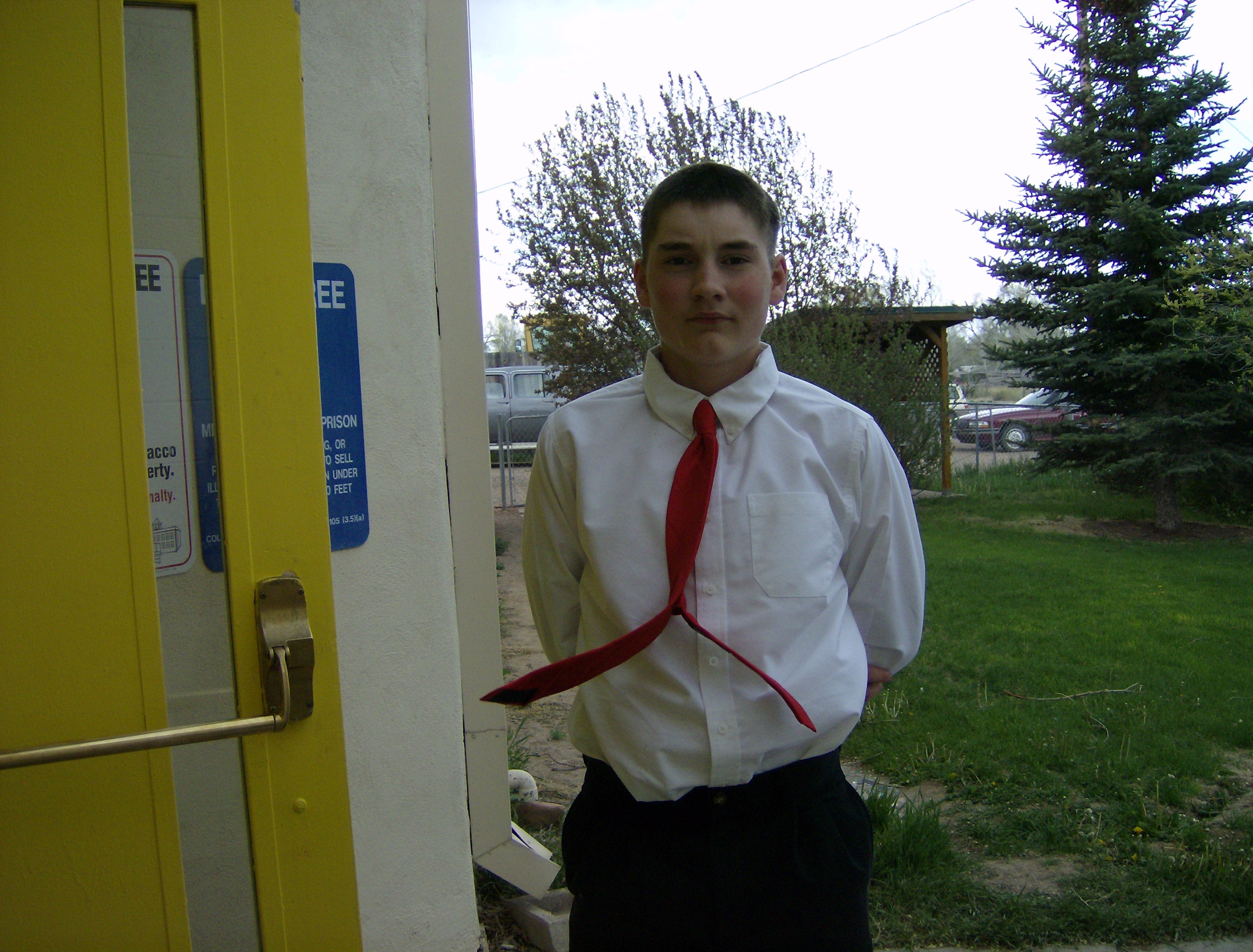 It was a bit windy by the time I took his picture. 🙂 However, it was a great day. Started out with a 6am haircut followed by a half day of school. At noon, Dan, Beth and I drove up to Gardner for a roast beef dinner. 🙂 All the parents are invited for lunch. The ceremony started at 1pm. All eight kids marched in as their 1st and 2nd grade reading buddies showered them with confetti. They were the honor guard. Then each student gave a speech. Some were literally “hello, thanks, mumble, mumble, goodbye. Others were very well written. Nancy Moore, their teacher was tearful, as this was her very last class. She is retiring. Kyla McCain did an iMovie with the kids and each one had a 2 minute section on just them. It showed the camera following the around on different days and it gave everyone a “feel” for each kid. It was really nice and each kid got a copy. After everyone spoke, Julia handed out awards and then Nancy handed out the diplomas. They all filed out to the reception. I know that I was glad to get off that hard bench! At Gardner, it’s traditional for the parents of the kids to bring stuff to share at the reception. Beth made brownies. There was also a cake and punch provided by the school. It was nice and we all got to mingle with people we hadn’t seen in a while. Dan and Beth left early as Dan had to head to Aguilar. I took the kids a bit later and we were all home by 3pm.

For me, it was back to the office and an attempt to find some information on DSL in Colorado. Ha! Decided at 6pm to call a halt to the day.

Tomorrow is the last day of school. Huzzah! I have to go pay bills, have lunch with my parents who got here on Tuesday, and do a fw other things as well as attack that DSL list again. Wheee….

I also get to research what part I need to fix my little red car. Dan and I thought that the new coil pack would do the trick. Well, it did part of it. However, halfway to picking up Matt yesterday it died. Right about the 12 mile marker on the way to Badito. The only good thing about the whole mess was that it died in a spot that still had cell phone signal. Normally, there is no signal on that road in may places. It started to pour rain just as Dan got to me. We swapped vehicles and I drove the truck while he took the car. He was speeding in an effort to keep the engine cool as well as get as far as he could before it died. Normally it isn’t a problem as there are never any sheriffs on the road. However, he got clocked going 87mph. I saw the blinking lights as I crested the hill, but didn’t see that it was him until I was almost level with them. I just laughed and pulled in next to him. When the sheriff got done, I hollered over to Dan that he owed me a dollar. That had been the bet. Only he said that I’d be the first one to get a ticket. Lucky for Dan, the sheriff was very nice and only ticketed him for 84 mph which is a lesser fine. It pays to be polite. I’m still laughing! The sheriff laughed because of the bet too! Maybe that’s why Dan got the lesser fine!